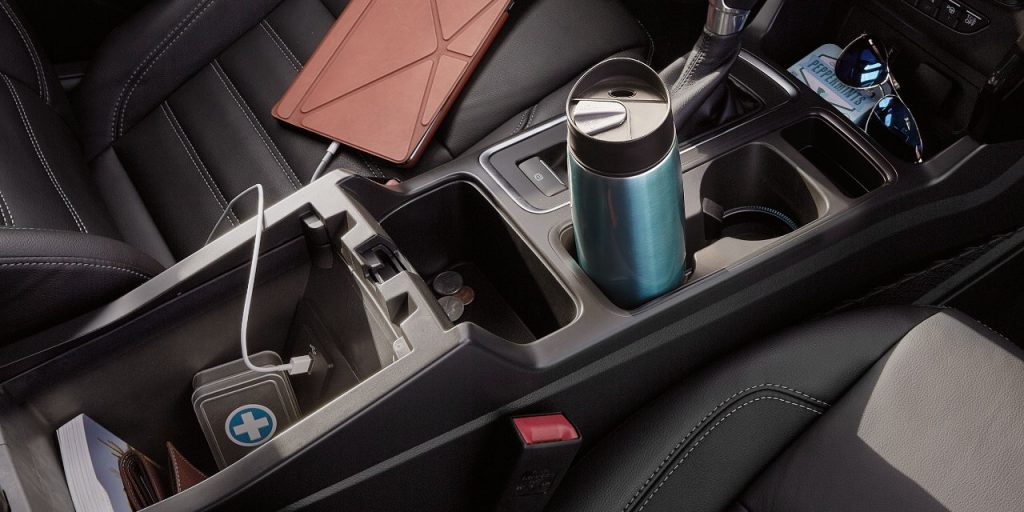 The refreshed, 2017 Ford Escape crossover offers 25 percent more front-row storage than the model it replaces, according to Ford, thanks largely to a reconfigured center console with a new, electronic parking brake.

“That whole center console area is what we call ‘Manhattan real estate’ because it’s valuable,” says Ford Senior Interior Designer Zulf Ali. “It isn’t a lot of space to work with, but as a designer, those constraints are exciting. It’s a challenge that forces you to be more creative – to ask yourself, ‘OK, how can we get clever with this?'”

The switch from a more traditional parking brake handle to a lower-profile button allowed the Ford Escape’s designers to move the gear-selector further rearward, leaving enough space to integrate a sizeable media bin with a lighted USB port and a typical 12-volt plug. The console has also been made somewhat wider, enabling a main center console bin that’s almost 50 percent bigger than that on the previous Ford Escape. An additional two storage bins – one ahead of, and one behind the gear-selector – provide spaces for the driver’s wallet, keys, coins, etc.

Improved cupholders in the 2017 Ford Escape can accommodate a wider variety of bottles and cups, and the glove box has been reworked with a new, “swing-bin” design to ease placing and retrieving items.

The redesigned, 2017 Ford Escape crossover is in showrooms now.