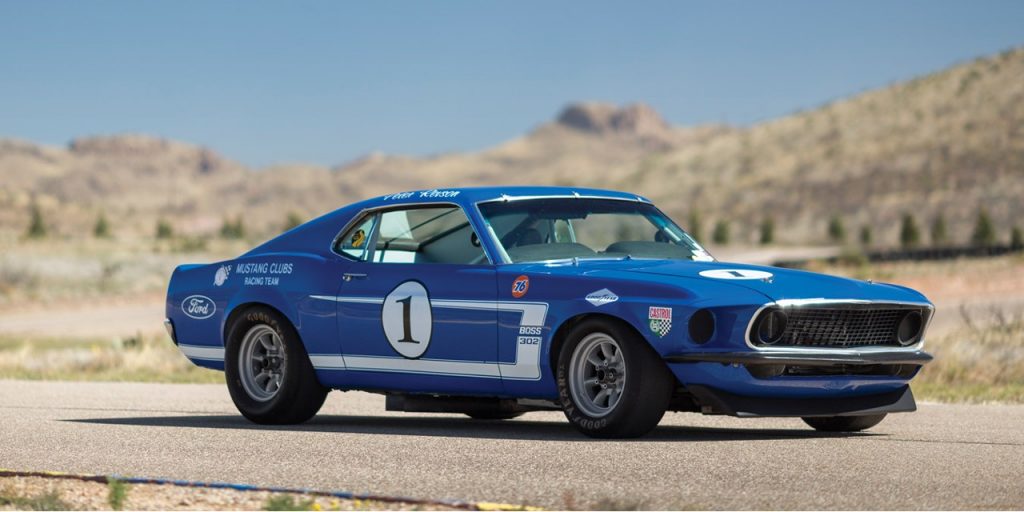 The high-performance pony car shown above, a 1969 Ford Mustang Boss 302 Trans Am race car, is the last of its ilk. Three such cars were built by Kar Kraft and prepared by Shelby for racing in the 1969 Trans Am season, the other two being written-off at some point during their motorsport endeavors, leaving this competition-spec Boss 302 the lone survivor.

It will be heading to auction at RM Sotheby’s Monterey event later this summer, coinciding with the 2016 Pebble Beach Concours d’Elegance.

This 1969 Ford Mustang Boss 302 Trans Am is currently part of the Jim Click Ford Performance Collection; Mr. Click took ownership in the early 2000s. A few years after he bought it, he commissioned Don Roberts to build a new engine for it from a 302-cubic-inch block. Prior to that, it had received a full, original-spec restoration between 1987 and 1990, and looking at the photos, you’d be hard-pressed to find much of anything amiss. That’s despite having been campaigned in historic racing for much of its post-Trans Am life.

Engine output for this Ford Mustang Boss 302 is estimated to be around 525 horsepower, thanks to a Holley four-barrel carburetor. It’s equipped with a double-wishbone front suspension and a four-speed manual transmission, with disc brakes on all four corners.