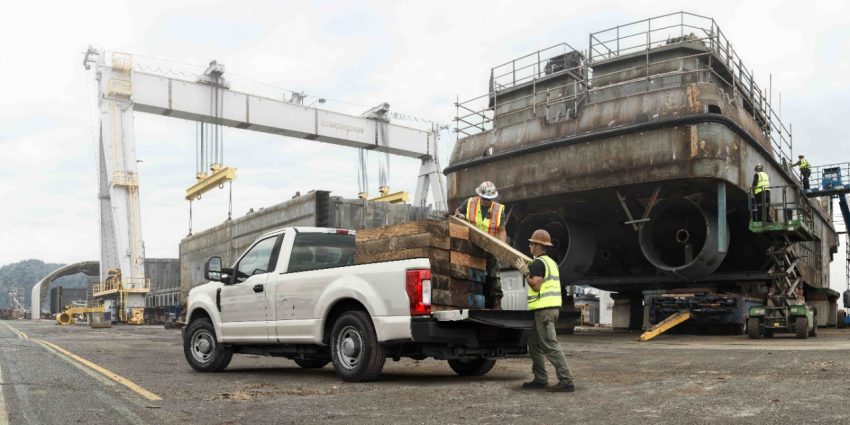 The all-new, 2017 Ford Super Duty has been taken to new heights with regard to towing and hauling capabilities, thanks in part to its new, fully-boxed steel frame.

According to Ford, the new Ford Super Duty’s frame is as much as 24 times stiffer than that on the outgoing truck, containing 95-percent high-strength steel. Like the F-150 before it, the Super Duty has also switched to a body largely comprised of military-grade aluminum alloy, allowing engineers to reinvest some of the resulting weight savings by beefing up other components.

Additionally, the 2017 Ford Super Duty can be optioned with a potent 6.7-liter diesel V8, delivering an impressive combination of 440 horsepower and 925 lb-ft of torque. The standard, 6.2-liter petrol V8 still makes 385 horsepower, but now with a class-best 430 lb-ft of torque.

All of this adds up to a Ford Super Duty that can tow more and work harder than any other heavy-duty pickup available.

Ford says that the new, 2017 F-250 with the all-new trailer tow package is capable of a class-leading 18,000 pounds of conventional towing. The same towing capacity is available from the F-350 single-rear wheel. The F-450 SuperCrew 4×4 is even more impressive, offering up to 32,500 pounds of gooseneck towing, which is 1,290 pounds better than its nearest competitor. Fifth-wheel towing is rated at 27,500 pounds – 2,500 pounds more than the nearest competitor.

Finally, the most telling number of all: maximum gross combined weight rating (GCWR) for the 2017 Ford Super Duty and trailer now peaks at 41,800 pounds. That’s more than half the max GCWR of an 18-wheeler on the majority of federal highways.

“This is the best heavy-duty truck we’ve ever made,” says Ford Truck Marketing Manager Doug Scott. “We listened to our customers and created the toughest, smartest and most capable Super Duty ever.”