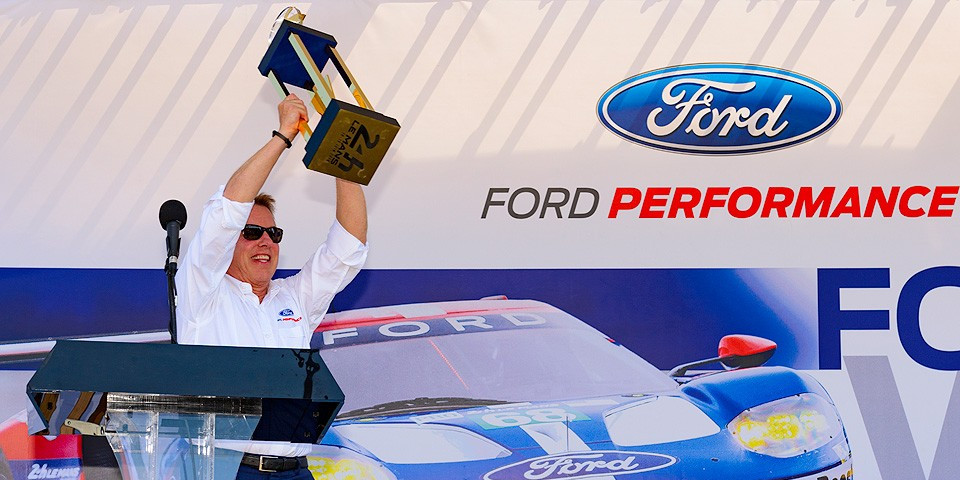 On Tuesday, members of Ford Chip Ganassi Racing and Ford Performance got together at the automaker’s Product Development Center to present the trophy from this year’s 24 Hours of Le Mans to the scores of people who helped make it happen: the employees.

“It’s always a great day when you can bring a celebration like our Le Mans victory back to Ford employees and be able to present this trophy to them,” said Ford Performance Global Director Dave Pericak. “This victory for was them. So many of our employees worked very hard to help us get ready to race at Le Mans, and we couldn’t have done it without them.”

On-hand for the presentation was team-owner Chip Ganassi, along with winning drivers Joey Hand, Dirk Müller, and Sébastien Bourdais, who together piloted the No. 68 Ford GT to victory on June 18th and 19th. Also present were drivers Ryan Briscoe and Richard Westbrook, who shared time in the third-place No. 69 Ford GT with Scott Dixon.

“The new Ford GT is a spectacular car and we feel honored to be the ones to race it and represent Ford,” Mr. Ganassi said. “In just two-and-a-half years, this Ford Performance Chip Ganassi Racing program has won the 12 Hours of Sebring, the Rolex 24 At Daytona, and the 24 Hours of Le Mans, among others. You can probably call that the sports car triple crown – the three biggest sportscar races in the world – and Ford and Chip Ganassi Racing have made an indelible mark on all of them. I couldn’t be more proud.”

The Ford GT’s triumph at Le Mans marked Chip Ganassi’s 175th victory, and qualified him as the only team-owner in racing history to win the Indianapolis 500, Daytona 500, Brickyard 400, 24 Hours of Daytona, 12 Hours of Sebring, and 24 Hours of Le Mans.