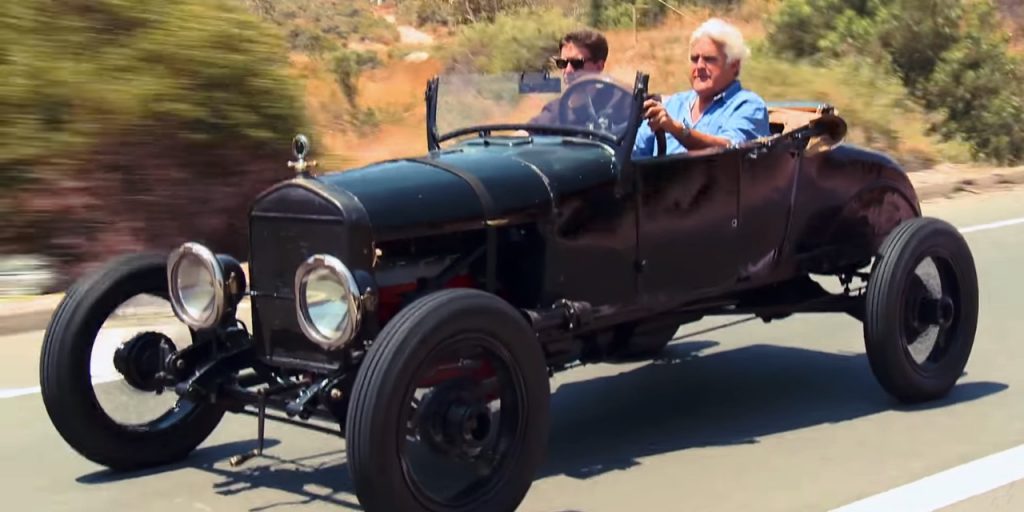 A new episode of Jay Leno’s Garage was just published over the weekend, in which Jay is visited by a bona fide 1927 Ford Model T hot rod owned by one Clayton Paddison.

At first glance, the Ford Model T may seem a less-than-ideal base for building a hot rod; its 177-cubic-inch (2.9-liter) four-cylinder engine was rated at just around 20 horsepower when new, and the transmission was a performance-limiting 2-speed planetary design. Yet, Mr. Paddison over the years managed to turn his $800 Ford Model T into a hot rod with just $6,000 or so invested.

Perhaps the most peculiar aspect of Mr. Paddison’s Ford Model T is the drivetrain. In addition to the T’s stock 2-speed transmission, Paddison installed both a Ruckstell 2-speed axle and a Chicago 3-speed overdrive unit, giving the car an insane number of possible gear ratios: 12 forward, and 6 reverse. The four-cylinder flathead engine has also seen its compression ratio bumped up from 3.98:1 to 6:1, and is now fed by a pair of Stromberg 81 carburetors.

Plenty more has been done to this 1927 Ford Model T hot rod besides. To get the full details, and to see Jay Leno’s reaction when he takes it for a spin around Burbank, California, be sure to watch the newest episode of Jay Leno’s Garage above.