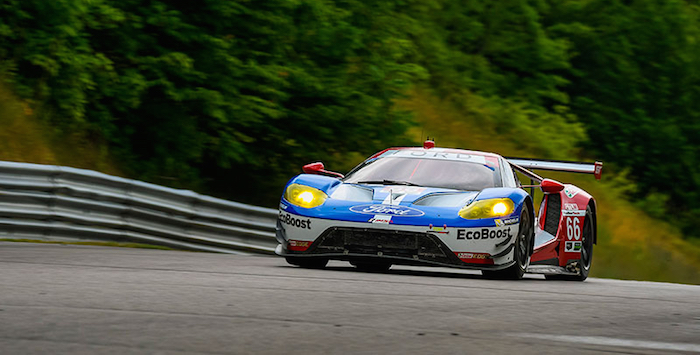 Chip Ganassi Racing and the Ford GT will shoot for their fourth consecutive IMSA WeatherTech Sportscar Championship class win as the GTLM field returns to Lime Rock Park for the first time since 2013 this weekend.

The No. 67 Ford GT of Richard Westbrook and Ryan Briscoe claimed three wins in a row at Mazda Raceway Laguna Seca, Watkins Glen International and Canadian Tire Motorsport Park. That string of performances has put them within five points of GTLM driver’s championship leaders Jan Magnussen and Antonio Garcia, so a strong showing at Lime Rock could jet them into the class lead.

IMSA’s appearance at Lime Rock this weekend will be the first time since 2013 America’s premier GT racing division has raced at the tight 1.5-mile circuit. Westbrook is looking forward to the return, having claimed his first American race series win there in 2008.

“There’s nothing’s like Lime Rock; it’s completely unique,” Westbrook said. “I’ve got fond memories there. My love for American racing started at Lime Rock when I got my first podium in America there in 2008, in the ALMS. It’s always a busy race. Such a short lap, and there’s a lot of strategy. It’s a hard, hard place to race in the heat of July. It’s important to try and have as clean a race as possible, but at Lime Rock, having a clean race is near to impossible.”

Ford will be under usual pressure from manufacturer’s championship leader Corvette Racing in Connecticut, but the No. 66 and No. 67 Ford GTs may also feel the heat from Ferrari. In a recent round of Balance of Performance changes, IMSA officials announced the Ferrari 488 would run a higher boost pressure and carry more fuel Lime Rock, making the already quick Risi Competizione team serious contenders.

The IMSA WeatherTech Northeast Grand Prix will kick off on Saturday, July 23rd at 3:05 p.m. Click here for a full on-track schedule of the weekend’s various IMSA events.