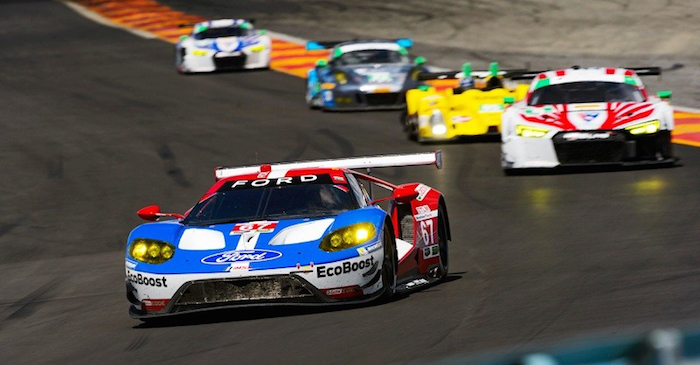 Ford Chip Ganassi Racing and the Ford GT raced to a 1-2 finish at the Sahlen’s Six Hours of The Glen Sunday, with the No. 67 Ford GT duo of Richard Westbrook and Ryan Briscoe taking the win and No. 66 teammates Joey Hand and Dirk Müller following them across the finish line in second.

Westbrook started from pole after turning in a fast qualifying lap of 1:41.301 during qualifying Saturday. He and Briscoe soon found themselves engaged in an intense battle with the BMW M6 GTLM of BMW Team RLL’s Dirk Werner and Bill Auberlen as Hand and Müller trailed closely in third.

For Ford, the move of the race came on the final lap when the No. 66 Ford GT made a daring pass at Turn 2 on the BMW to take second. The pass ensured Ford took its second 1-2 finish in a row after the team claimed a 1-2 finish at the 84th running of the 24 Hours of Le Mans in June.

“Clearly we have a little roll going here,” Hand said post-race. “(Briscoe and Westbrook) won at Laguna Seca, we both had fast cars there, then we went to the Le Mans 24 Hours and had a great run there and ended up first and third between these two cars.”

“This Ford Chip Ganassi Racing team, we’re hitting our stride. We got along really well from the beginning, but I think with the whole team, everyone is just flowing really good and we’re getting great support from our partners like Michelin and Castrol and IHG Rewards Club. There’s just a lot of good mojo.”

Ford will attempt to continue their win streak when the IMSA WeatherTech Sportscar Championship heads to Mobil 1 Sportscar Grand Prix at Canadian Tire Motorsports Park in Ontario. Click here for full results from the 2016 Sahlen’s 6 Hours of The Glen.