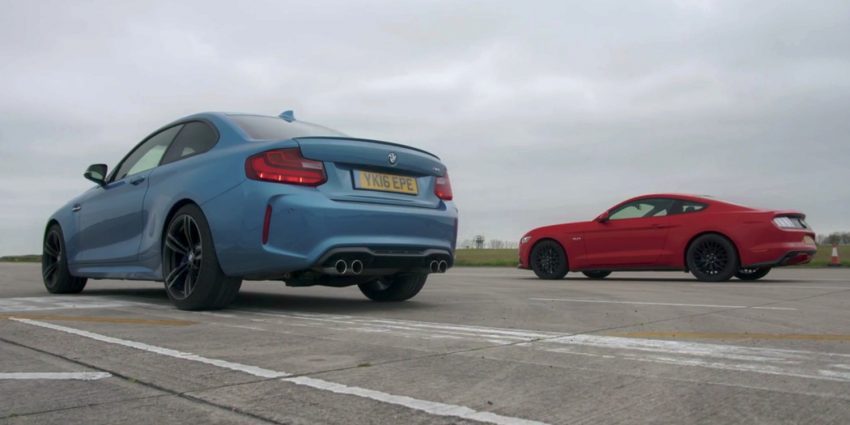 With a 5.0-liter V8 engine capable of producing greater than 400 horsepower at the crank, plus an all-new independent-rear suspension, the 2016 Ford Mustang GT is more ready for some of Germany’s premier sportscars than any Mustang before it – at least on paper.

Of course, horsepower, weight, and other figures are incapable of ever telling the full story; in order to truly know whether the latest Ford Mustang GT can measure up to the competition, real-world testing is mandatory. That’s why the UK’s Evo brought the Mustang out to a straight bit of pavement somewhere, testing it against BMW’s new M2 sports coupe in a good old half-mile drag race.

Although it costs considerably more, the BMW M2 is quite a bit down on power compared to the Ford Mustang GT, making just 365 horsepower next to the Mustang’s 410 HP (in Euro spec). However, it also weighs about 420 pounds less, giving both cars a weight-to-power ratio just over 9 pounds-per-horsepower. The M2 tested here also has a fast-shifting dual-clutch transmission to the Mustang’s 6-speed manual, and makes its thrust with the help of a pair of turbochargers, meaning that high levels of torque can be had throughout the full RPM range.

So which wins: German techno-wizardry, or American muscle? Watch the video above to find out.