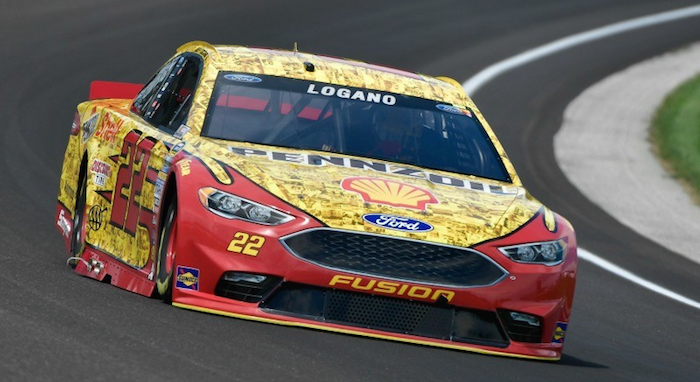 Joey Logano was the top finishing Ford Fusion driver in Sunday’s Brickyard 400 from Indianapolis Motor Speedway, finishing seventh after battling with eventual winner Kyle Busch for much of the race.

Busch dominated IMS for much of the weekend, winning Saturdays NASCAR XFinity Series race there, grabbing pole position for the Sprint Cup race and driving to a dominant win Sunday. The Joe Gibbs Racing Toyota driver also led 149 of 170 laps on his way to the win, a new track record for NASCAR at IMS.

Logano was one of the only drivers to challenge Busch for the win Sunday, restarting second alongside the No. 18 driver for the first of two overtime restarts. When the green came out, Logano and Busch got door-to-door, getting Busch’s car loose and allowing Logano to temporarily surge ahead. Unfortunately, a yellow flag was brought out after Jamie McMurray caused a wreck, setting the field back up for another overtime run.

When the track returned to green, Logano fell through the running order after getting slightly loose as he tried to catch Busch. He would turn up seventh, making him the highest finishing Ford driver of the day. Ricky Stenhouse Jr. was 12th, followed by Chris Buescher in 14th and Logano’s teammate Brad Keselowski in 17th.

“It just was not good,” Logano said of the final restart. “I had a decent restart the first time, and the second one I probably had just as good of a restart, but the 20 got underneath me and I was kind of stuck from that point and kind of fell into the clutches of the tires behind me. I was trying to stay down and be where I needed to be to get in front of them, but they just kept turning underneath me. I hate that we finished seventh, but it’s probably where we deserved to finish from a speed point of view.”

The NASCAR Sprint Cup Series heads to Pocono Raceway next for the Pennsylvania 400 on July 31st. Click here for full results from Indianapolis and here for a full schedule of next weekend’s NASCAR festivities.