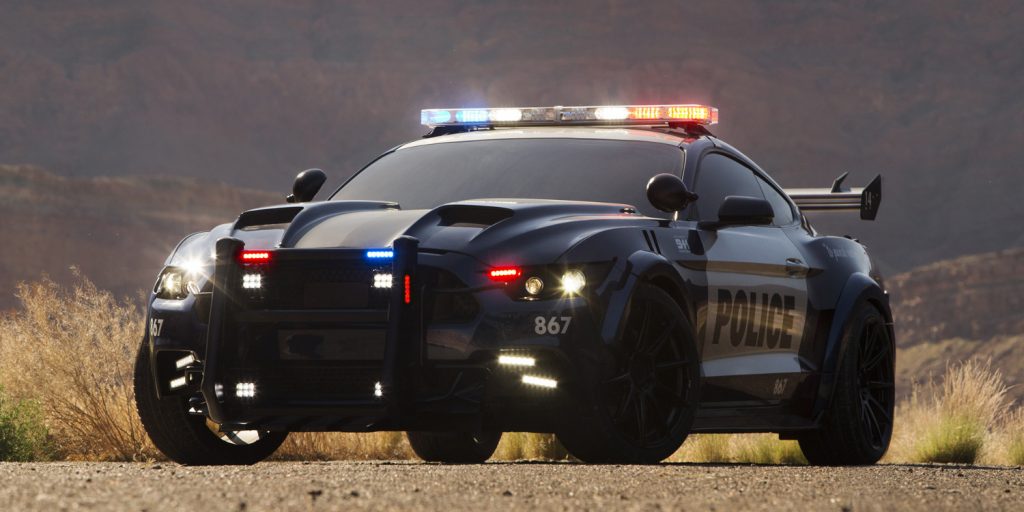 You may recall that Transformers Director Michael Bay last month released an enticing image of the modified sixth-generation Ford Mustang that will serve as the vehicular form of the antagonistic Decepticon Barricade in the forthcoming Transformers 5: The Last Knight.

Now, thanks to Autoblog‘s spy photographers, we get to see the big-screen-ready S550 Ford Mustang from even more angles, as the car was captured running around without any sort of disguise. Also snagged on camera was the yellow, sixth-generation Chevrolet Camaro that will play protagonist Bumblebee in the new film, paralleling the longtime, real-life rivalry between the Ford Mustang and Chevy’s own pony car most appropriately.

Barricade’s automotive form will once again take the shape of an aggressively-styled Ford Mustang police car. Shown in the image above, the Decepticon in this film will be rocking a wide-body kit with snarling hood scoops and sharp edges, a push bar, massive rear wing, and a smattering of extra lights. Previously, Barricade’s car disguise was based on a Saleen Automotive-built performance Ford Mustang model, but we’re unsure whether the film car is at all related to a Saleen this time around.

Be sure to check out the full gallery of Barricade and Bumblebee images on the Autoblog website.