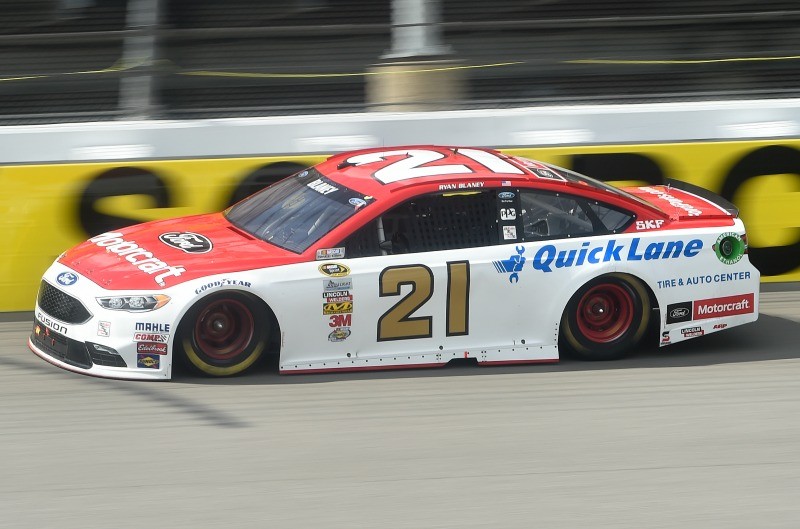 Brad Keselowski and Ryan Blaney were the top finishing Ford drivers in Sunday’s Pure Michigan 400 at MIS, turning up third and fourth, respectively. The 200-lap race was won by Kyle Larson, who held off fellow youngster Chase Elliott after a late-race restart to take the victory.

Keselowski, who started 18th, led 14 laps Sunday after going off pit strategy early in the race. With a “good long run car,” according to Ford, the Sprint Cup champion ran a consistent race to take the final podium position.

A lap 191 restart saw Keselowski restart on the second row behind Larson and race leader Elliott. When the green came out, Keselowski gave Larson a strong push from behind, allowing the Chevy driver to pull out a healthy lead over Elliott.

“The 42 (Larson) had a good run. The 24 (Elliott) was really good. We were a third‑place car most of the day,” Keselowski said. “On long runs, we were maybe the best car. For most of the day we were a third‑place car. Finished where we deserved. At the end I gave Kyle a really good push. Looked like Chase spun his tires a little bit. Next thing you know, we were off to the races. I got up to second. I wasn’t as fast as Chase, wasn’t able to get by him. Kyle was able to drive away, which was kind of the tale of the tape there on the short run. All in all a really strong day for the Miller Lite team.”

In addition to Keselowski, Chris Buescher also ran a strong and consistent race. The rookie, who took his first career win at Pocono earlier this year, was forced to pit early on with an engine issue. The Front Row Motorsports team quickly diagnosed the issue, however, and sent him back out to salvage a 35th place finish. Buescher now sits five points in the top 30 and is in the cutoff for The Chase.

But while Keselowski, Buescher and Blaney walked away from MIS with positive tales to tell, Logano left frustrated. The No. 22 Ford driver started from pole position, but quickly lot track position and battled with an ill handling car as he attempted to make up the ground. A 10th place finish was all Logano could salvage.
“We kind of ended on a down note there,” he said post-race. “I don’t know. We lost our track position early in the race which hurt us and then we got our car balance fixed but it is so hard to pass. To get back up there was challenging.

“The pole was nice we just weren’t as competitive as we were in the spring race. Our car drove the same, everyone just got better,” he added.

NASCAR heads to Darlington Raceway next for the Bojangles’ Southern 500. Click here for full results from Michigan and here for a full scheulde of next weekend’s NASCAR festivities.