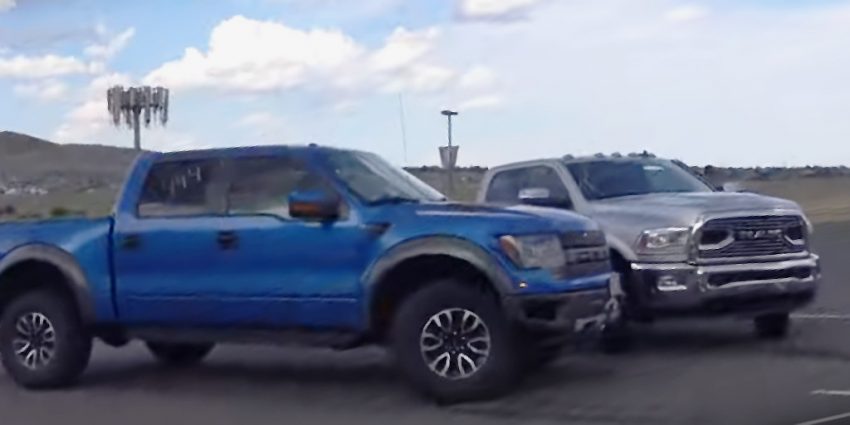 There’s more to this all-American truck drag race than meets the eye.

The Fast Lane Truck recently got together a 2014 Ford SVT Raptor (6.2-liter normally-aspirated V8) and a 2016 Ram 3500 HD dually (6.7-liter turbocharged Cummins I6 diesel) to pit against one another at Bandimere Speedway, which sits over 5,000 feet above sea level. At first glance, it might seem that the sportier of the two trucks – the SVT Raptor – would be the obvious horse to back, but there are a great many factors at play.

For instance, the 6.2-liter V8 in the last Ford SVT Raptor is capable of a mighty 411 peak horsepower and 434 lb-ft of torque at sea level, but TFL Truck says that because of the thinner air at this altitude, the engine ought to lose about 18-percent of its power. Conversely, the Cummins turbo-diesel in the Ram – ordinarily good for 385 horsepower and a mammoth 900 lb-ft of torque – ought to lose less of its output at approximately a mile above sea level thanks to its turbocharger.

Of course, being a diesel engine, the Cummins engine almost certainly has more rotating mass, making it comparatively slow to climb through the RPM range. What’s more, the truck itself weighs about 2,000 pounds more than the 2014 SVT Raptor, although its dual-rear wheels might give it an edge with regard to getting a good launch.

So which of these American pickups – the Ram 3500 HD, or the Ford SVT Raptor – has what it takes to dominate at the drag strip? Watch the video above to find out.