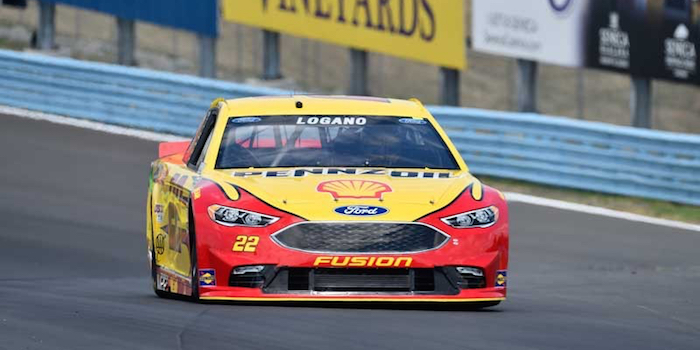 Despite Logano locking down second place, it was Keselowski most onlookers would have pegged to finish better going into the final lap of the 90-lap race. Keselowski was sitting third behind Hamlin and Martin Truex Jr. going into Turn 7 when Truex went wide and re-entered the track slower than Keselowski. Having already committed to the turn, Keselowski got into the rear of Truex and spun him. Logano capitalized on the mistake to steal second, while Keselowski came home third.

“I got right up to the bumper of the 78 and couldn’t do anything there and he made a move to get by the 11 on the inside and the 11 blocked him,” Keselowski said post-race. “I went high and the 78 went high and by then I was already deep in the corner and got into him and turned him. That was really unfortunate and the last thing I wanted to see. This track here, when you drive into the corner, you commit and sometimes you don’t know what will happen when you commit. The last thing I wanted to do was turn him. I am proud of my guys for a really fast race car and it was another crazy Watkins Glen day.”

Logano and Keselowski weren’t the only drivers involved in last-lap chaos. Behind them, Kyle Larson and AJ Allmendinger were locked in an intense battle for fourth. Allmendinger ended up getting into the rear of Larson on the exit of Turn 7 and turning him around, sending Larson sliding across the track and into pit lane. Much like Keselowski, Allmendigner was repentant post-race, saying he “never meant,” to turn Larson around.

The last lap craziness was representative of the entire race. A total of eight caution periods were put out for a total of 20 laps, with four of those coming after multicar incidents. Jeff Gordon also took on damage early, getting into the rear of Austin Dillon’s No. 3 Chevrolet. The race stayed green after that incident, however, as Dillon spun off track and stayed off the racing line.

The elbows up style of racing was expected by Logano.

“Typical Watkins Glen,” Logano said. “I mean, it’s just awesome, crazy racing, full contact. Just insane out there. So a lot of fun from the driver’s seat and I’m sure the fans loved it as well in front of a sold out grandstand.”

NASCAR heads to Bristol next for the highly anticipated Food City 300 night race on August 19th. Click here for full results from Watkins Glen and here for a full schedule for Bristol.