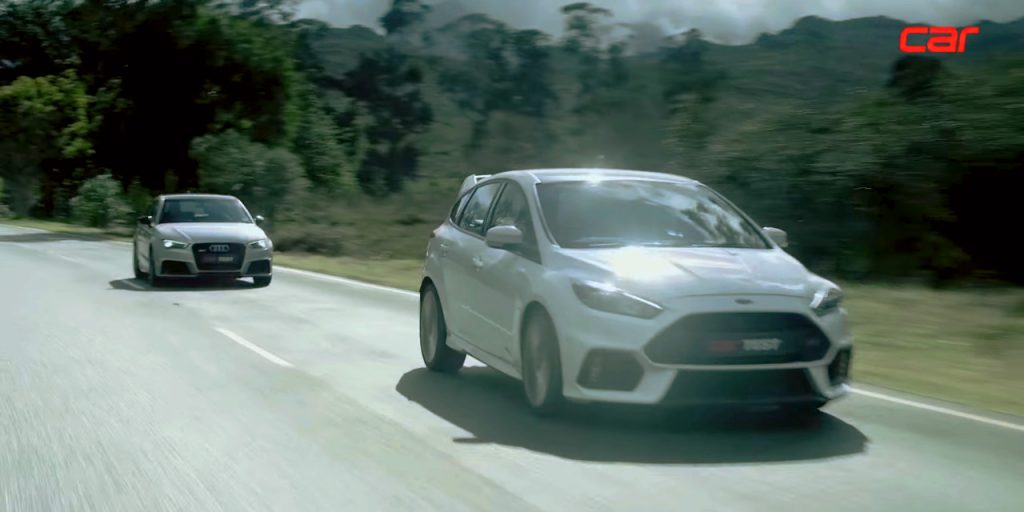 The Ford Focus RS – the Blue Oval’s new foray into what many have dubbed the “hyper hatch” segment – has already won its fair share of praise from the motoring press.

In the latest video from the UK’s Car Magazine, we get to see how the new, technologically-advanced Focus RS fares against a more-premium German predator otherwise cut from the same cloth: the Audi RS3.

Both cars have clever all-wheel drive systems, and both spit out in excess of 250 kW (340 horsepower) thanks to aggressively-tuned and turbocharged inline engines, the Ford making do with a 2.3-liter 4-cylinder vs. the Audi’s 2.5-liter 5-cylinder. Already, a bit of a performance gap becomes apparent; the Audi RS3 has a peak power output of 367 HP, compared to 350 HP from the Focus RS.

But let’s not count Ford’s new Focus RS out just yet, as its GKN-sourced “Twinster” all-wheel-drive system is appreciably more advanced than the Audi’s drivetrain, and allows for “true” torque-vectoring both front-to-rear and side-to-side. The overall consensus from Car’s Nicol Louw and Wilhelm Lutjeharms is that this lends the Ford a bit of an edge in cornering.

By the end of the test, Nicol Louw comes away from the 2016 Ford Focus RS with the opinion that it is a “driver’s car par excellence.” But is it good enough to take on Audi’s subtler, much more premium “hyper hatch?” Watch the video above to find out.