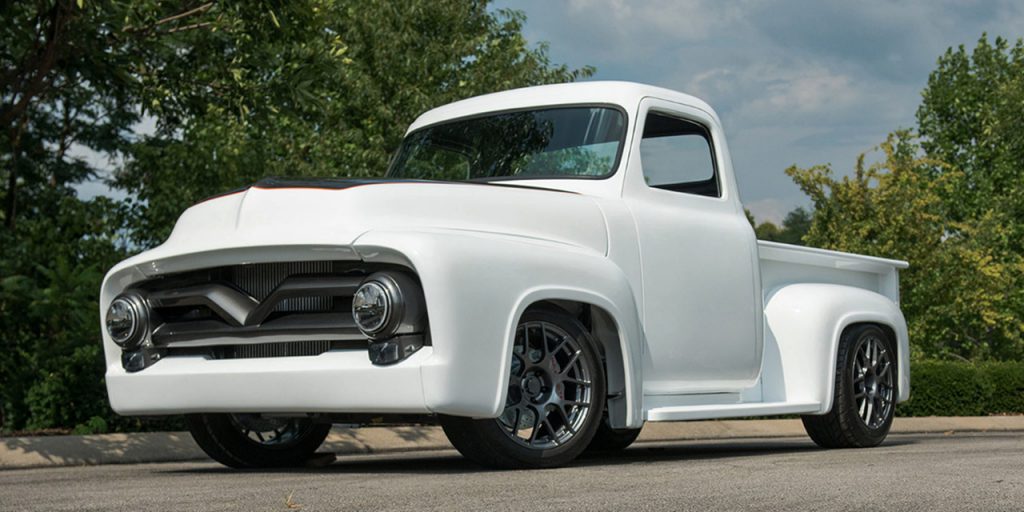 The city of Louisville, Kentucky – home to the Kentucky Truck Plant where the Ford F-Series Super Duty is built – is inarguably one of the truck capitals of the US.

Given that, it’s hard to think of a more appropriate setting to auction off a vintage resto mod pickup like the 1955 Ford F-100 pictured above. Built on the PowerNation program Truck Tech over the course of two years, this vintage-modern truck is set to cross the auction block at Mecum’s Louisville event from September 8th through the 10th.

This Ford F-100’s build list is extensive, but it all starts with a JW Rod Garage chassis and a Mustang II-type front suspension. The rear – a Currie 9-inch with 3.73:1 gearing – is kept in-check up by a 4-link parallel setup, and all four corners boast Viking coilovers and Baer disc brakes. Under the hood dwells a 365-horsepower / 420-lb-ft Ford 3.5-liter EcoBoost V6, linked to an American Powertrain 5-speed Magnum manual transmission. Of course, of arguably greater importance is this Ford F-100 resto mod’s body, which is comprised entirely of brand new sheet metal with the exception of the cab and doors, according to Mecum. The roof has been lowered by two inches while the bed was raised by one-and-a-half, giving it a more contemporary proportionality than the original 1955 model. The fenders were also widened by two inches, and reworked along with the running boards to lend the truck a more seamless appearance.

For more photos and info regarding this one-of-a-kind Ford F-100 resto mod, check out the original listing at the Mecum Auctions website.