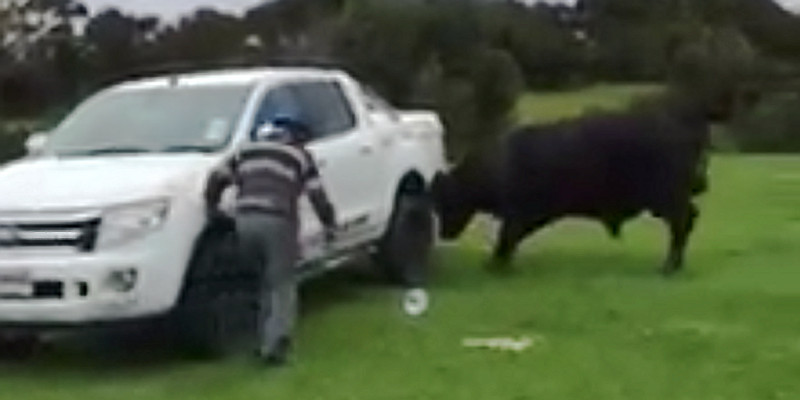 Well, this is pretty bold.

A video posted to Facebook earlier this week by user Whetu Konia depicts an 81-year-old man hopping the fence on a ranch to frighten a full-grown bull away from his Ford Ranger pickup. We discovered the video thanks to the folks at Jalopnik, and we figure it’s got to be a better advertisement for the mid-size Ford Ranger than any dedicated ad agency could ever have cooked up.

In the video, Whetu Konia’s elderly father tries to scare off the bull after the animal displays a worrying level of curiosity about the pickup. He climbs over a fence on the ranch, tossing both a large water jug and his bright blue hat at the nosy bovine to get it away from his Ford Ranger. When neither maneuver is successful, he employs just about every other method in the book, including waving his arms, lurching toward the animal, and jumping.

It takes a special sort of man to perform a stunt so dangerous as facing down a full-grown bull, and perhaps a very special bond with his truck. We have to give 81-year-old Mr. Konia Sr. props, although we can’t recommend that anyone try this at home.

2016 Ford Focus RS Chases Down A Porsche On The Track: Video