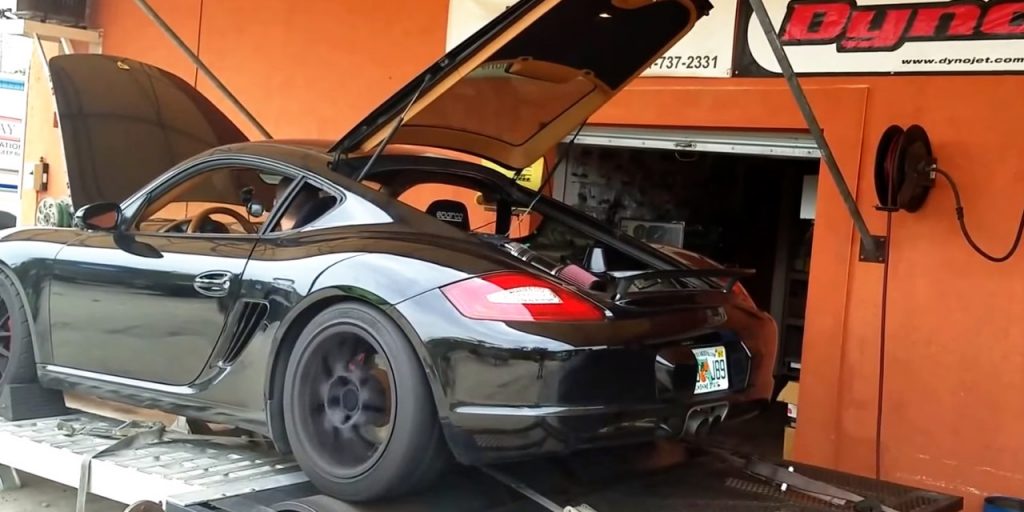 In August, we discovered a totally unique engine-swapped car the likes of which we’d never laid eyes on before: a first-generation Porsche Cayman S with the 5.0-liter Coyote V8 from a Ford Mustang GT. (More precisely, its intake plenum identifies the engine as the “Road Runner” variant used in the Boss 302.)

The car seen dyno testing in this video by Power By The Hour Performance might or might not be the same Porsche Cayman, but it’s a fascinating engine swap to revisit anyway. Just how, after all, does one manage to squeeze a big V8 into such a small, rear-mid-engined coupe? As we see here, the engine does fit, only just barely; the air filter projects rather prominently into the boot, and the motor stands quite a bit taller than where the original Cayman engine compartment ends.

So what about performance? The guys at Power By The Hour Performance tested this Porsche Cayman at 428 horsepower and 364 lb-ft at the wheels – significantly better than the 257/218 they observed from another Cayman with its original motor. Who cares if trunk storage has been all but ruined by the Mustang’s big, tall Coyote V8? Doesn’t performance trump all?