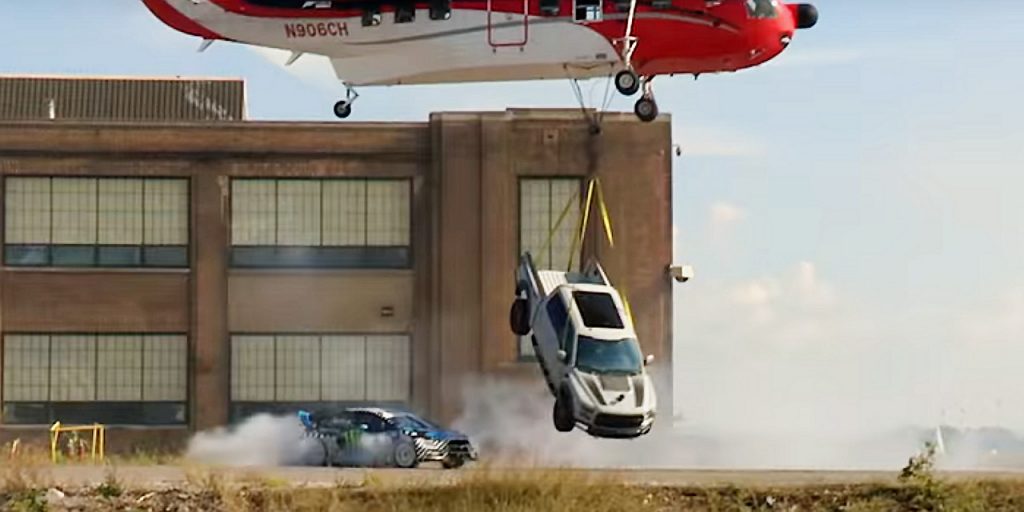 In Gymkhana 9, when rallycross driver and professional daredevil Ken Block drove his Ford Focus RS RX in circles around a Ford F-150 Raptor suspended by a dual-rotor helicopter, that stunt was inspired by actual gameplay from Forza Horizon 3 for the Microsoft XBox One.

The upcoming racing game/ode to performance, stunts, and automotive decadence served as a sponsor for the ninth and most recent installment of Block’s Gymkhana series, and as Turn 10 Studios Sr. Partner Manager Justin Osmer explains in the video above, the development team shared some of their favorite “Showcase” features from the upcoming Forza title with Hoonigan to be integrated into the video. The aforementioned Raptor stunt was inspired by a Showcase where the player must race a car being toted around in the same fashion. The Gymkhana 9 train stunt, where Block crosses the tracks just ahead of an oncoming freight train, was based on another FH3 Showcase.

Check out the video for more details on the making of Ken Block’s latest Gymkhana video. Forza Horizon 3 is scheduled for release on September 27th. Gymkhana 9, of course, is already available for viewing, but Ford is planning on releasing a different version that takes advantage of 360° virtual reality.