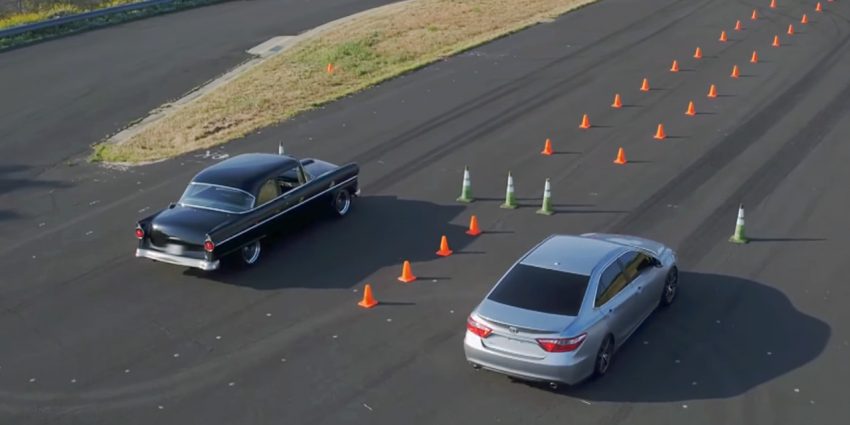 In a recent clip from Jay Leno’s Garage, Leno and his good friend Tim Allen have agreed to a factory-stock drag race, but things get a little out of hand when Allen turns up with what is clearly not an original 1955 Ford Club Coupe. Inside and out, the car looks correct – until you get under the hood, where the supercharged, 5.4-liter Modular V8 from a 2005-’06 Ford GT lives, making somewhere around 550 horsepower.

That’s a considerable lot more than the 1955 Ford’s stock horsepower rating, which could range from 120 to about 190 horsepower depending on the engine.

In response to Tim Allen’s cheated-up 1955 Ford coupe, Jay Leno makes an excuse to rush his 1966 Dodge Coronet home, and comes back with “his wife’s Camry,” which is, in fact, not very stock either. The deep, impenetrable window tint makes it difficult to tell from outside the vehicle, but Leno’s sleeper Toyota features a stripped interior, removable wheel, roll cage, extinguisher – basically everything required of a race car, plus a thumping, supercharged, 5.7-liter V8 under the hood capable of somewhere around 850 horsepower.

So, which cheater car wins: the GT-ified 1955 Ford Club Coupe, or the mental Toyota Camry race car? Do you even have to ask?