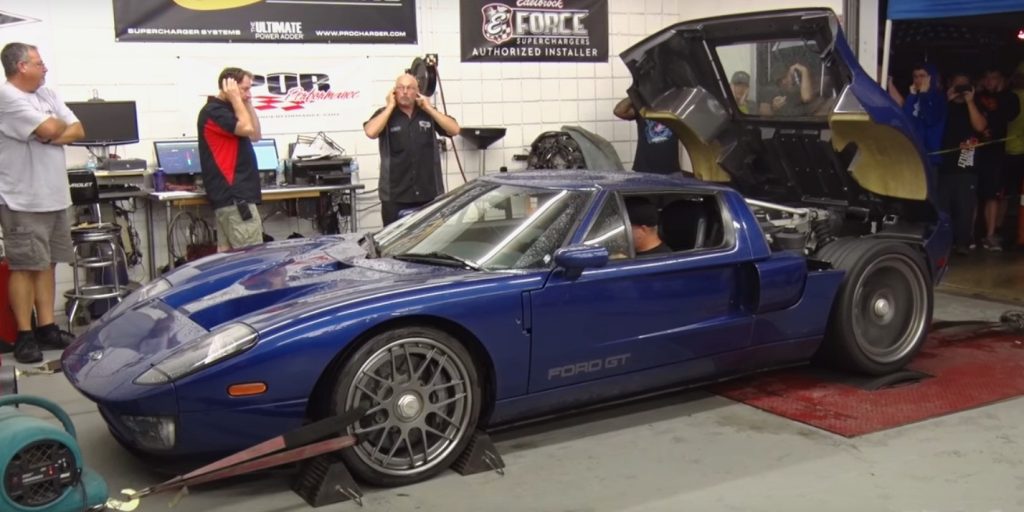 The pursuit for more horsepower is never-ending, and can drive a person to do crazy things – even if it means fiddling with a rare, valuable supercar like the 2005-’06 Ford GT.

As a matter of fact, YouTube channel “1320Video” just published a piece that documents what might be the world’s first – and only – Procharger-equipped Ford GT. The car was taken to Street Car Takeover St. Louis, where it ran 9s and 10s in the rolling-start quarter-mile.

How? A dyno test at the start of the video reveals that this Ford GT is producing about 873 horsepower at the rear wheels – over 1,000 horsepower at the crank, assuming the standard 15% drivetrain loss. More impressive is that it makes all that thrust with a bone-stock motor, using a Procharger F1A-94 centrifugal supercharger instead of the twin-screw unit originally deployed by Ford. The Procharger unit makes about 30 pounds of boost at its peak, according to its owner.

Even more impressive still is that the owner has put plenty of miles on his Ford GT with no real issues to-date. He drove the car to St. Louis from Minnesota for the Street Car Takeover – a distance of about 500 miles – shortly after taking it on a rally from Minnesota to Milwaukee to Chicago and back.

After driving about 7,200 miles in less than two weeks, we’d say a few quarters of a mile more ought to be a walk in the park for this Procharged Ford GT.