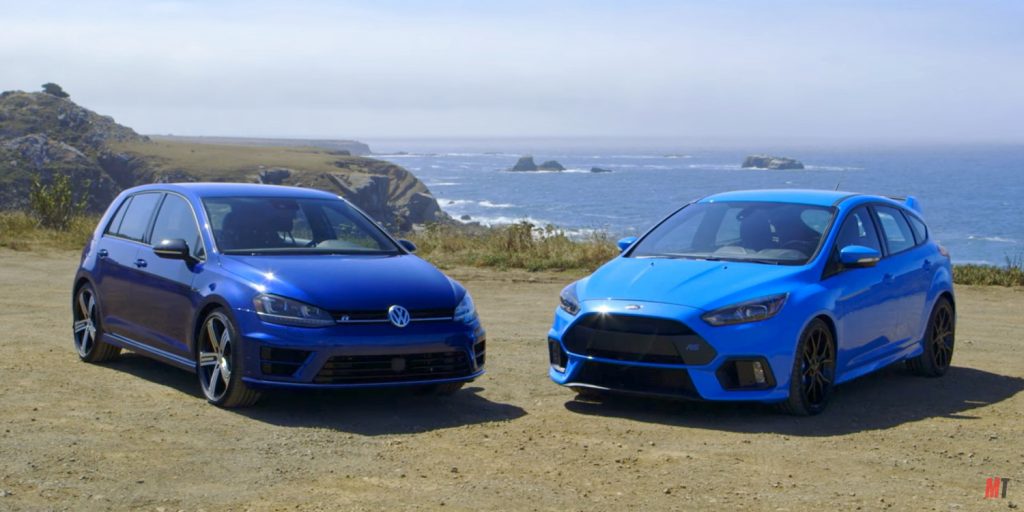 Being the best hot hatch ever to wear the Blue Oval, and arguably one of the greatest sportscars Ford has ever concocted, the Mk III Ford Focus RS invites frequent comparisons with some of the world’s hottest contenders.

In the latest episode of Motor Trend‘s “Head 2 Head,” we witness such a comparison with the Focus RS’ principal German competitor: the Volkswagen Golf R.

We won’t spoil the conclusion for you here, but we will say that on paper, it looks like an uphill battle for the German car. Although both models are turbocharged, all-wheel drive hot hatches based on lesser FWD cars, the VW is comparatively underpowered by its 292-horsepower, 2.0-liter four-cylinder. (Compare that to the Focus RS’ 2.3-liter EcoBoost mill, which is rated at 350 horsepower.) The deficit in power is echoed by the two cars’ differences in visible coolness, with the Ford receiving all the wild, “look-at-me” styling cues that one might expect from a fun, juvenile hot hatch.

The Volkswagen has none of that.

Finally, Motor Trend’s Jason Cammisa and Jonny Lieberman go on at some length about the differences in the two cars’ all-wheel-drive systems. The new Ford Focus RS, of course, has an advanced torque-vectoring system that can send a majority of the engine’s torque rearward, helping to mitigate understeer. The Golf R, by contrast, has a Haldex-supplied system which can send at most 50 percent of the torque to the back wheels, and usually maintains something of a front-wheel bias. This gives the German car more of a propensity for understeer than is found on the American.

Check out the latest episode of “Head 2 Head” above to find out which of these well-powered hot hatches comes out on top.