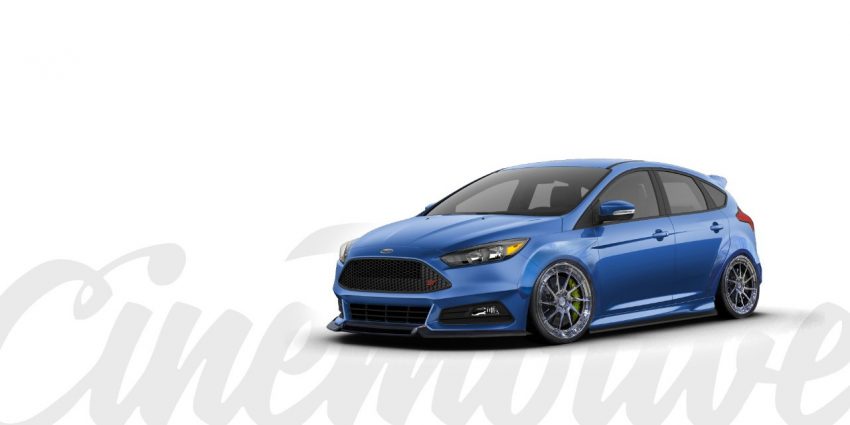 It’s rather easy to overdo it when building a custom car. You install an aftermarket hood, front fascia, side skirts, spoiler, etc. and before you know it, your once-tactful hot hatch has become a grotesque, bulging caricature of itself.

That seems not to have been a problem for Los Angeles-based outfit Cinemotive Media when they went about putting together a custom 2016 Ford Focus ST concept for the annual SEMA Show in Las Vegas. Despite its bulging fender flares, front valence, rear diffuser, and side extensions from SS Tuning, and some striking, 18-inch ADV.1 Wheels, the build exhibits just the right amount of flair without bordering on the unsightly.

Cinemotive’s Focus ST SEMA build features the same 2.0-liter EcoBoost I4 as the stock car, abetted by Mountune’s MR300 performance package, which includes a high-flow induction kit, upgraded intercooler, 3-inch downpipe, 2.5-inch cat-back exhaust kit, ECU calibration, and all the requisite plumbing and other, minor bits. The suspension has been revised with a BC Racing BR Series coilover kit, and Cinemotive’s own rear camber arms, while 6-piston Baer brakes sit at all four corners.

Cinemotive’s striking-while-tasteful Ford Focus ST build will be on display at the 2016 SEMA Show in Las Vegas next month, which runs from November 1st through the 4th. For the latest from that event, stay tuned.

Cinemotive Media Brings Out A Ford Fiesta ST For SEMA