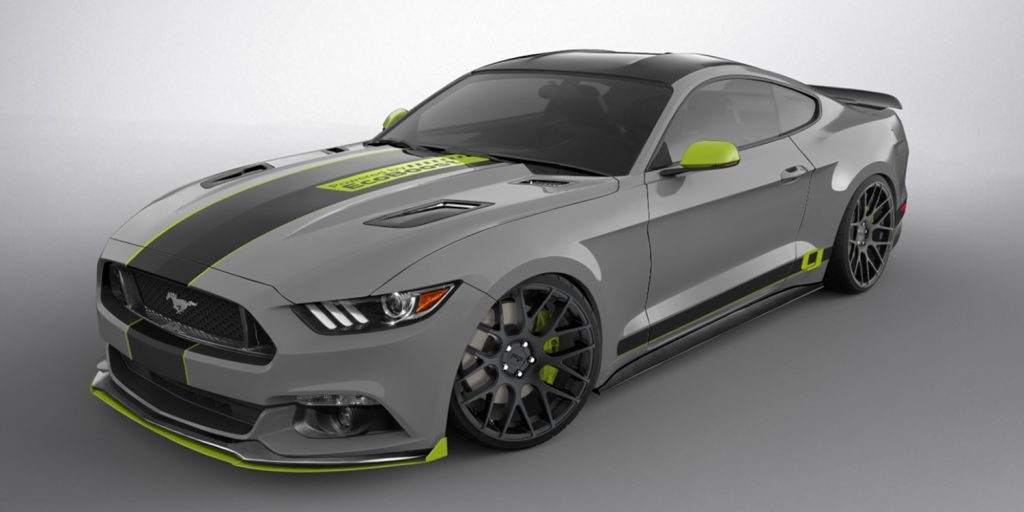 As the 2016 Specialty Equipment Market Association (SEMA) Show draws near, we’re taking a look at some of the hot, Ford-based concepts headed to Las Vegas for the event.

With that, say hello to CJ Pony Parts’ rather sharp-looking 2017 Ford Mustang EcoBoost.

Equipped with the Mustang EcoBoost’s factory 2.3-liter EcoBoost I4 and 6-speed manual transmission, this pony car concept promises driver satisfaction right out of the gate. A Borla exhaust, Cobb intercooler, and Ford Performance cold-air intake combine with a custom engine tune to boost engine output past that of the stock car, with 100 extra horsepower freed up by 6,000 RPM. Handling is aided by Michelin Super Sport tires, a Ford Performance suspension kit, strut tower brace, bushing kit, brake upgrade, and more.

But the CJ Pony Parts SEMA Mustang EcoBoost is no slouch in the aesthetics department, either. It features custom, low-key “Stealth Grey” paint punctuated by splashes of vibrant “Acid Green,” and derives its aggressive demeanor from a handful of Anderson Composites carbon-fiber body pieces. The list includes a GTH-style hood, a deck lid, front spoiler, side skirts, and upper grille.