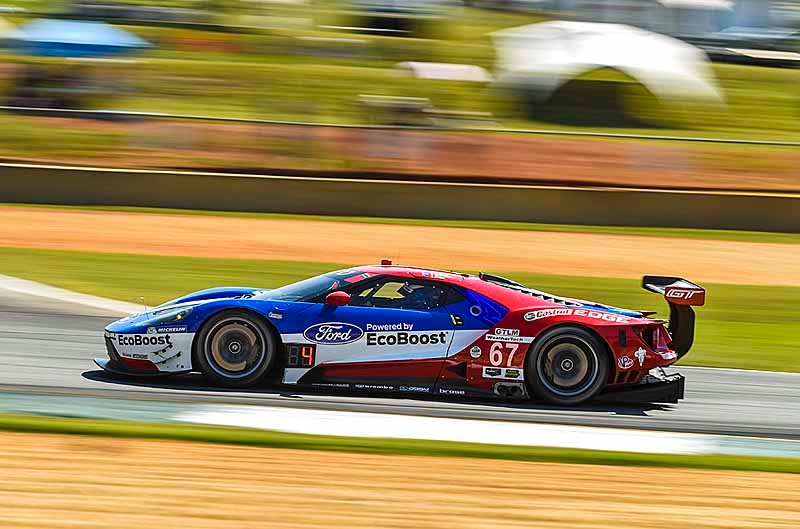 The Ford GT and the IMSA Ford Chip Ganassi Racing team rounded out a stellar debut season for the newly introduced racecar with a second place finish in GTLM at Petit Le Mans this weekend.

Dirk Müller, Joey Hand and Sébastien Bourdais, the same trio that won the 24 Hours of Le Mans in June, combined their talents to once again put the No. 66 GT on the podium Saturday. The No. 67 GT of Richard Westbook, Ryan Briscoe and Scott Dixon was seventh in GTLM after experiencing mechanical issues early on.

The No. 67 car was the favorite of the two Fords to win Saturday after Westbrook landed on pole following Friday afternoon’s qualifying session. Things didn’t go smoothly Saturday, however, with the car suffering a broken wastegate pipe in the third hour that sent them into the pits for repairs. A loose door also plagued the team, forcing them to pit numerous times in order for it to be fastened.

With the No. 67 out of the picture, it was up to the No. 66 to deliver. After running near the front for much of the race, Müller moved into the lead with just over 40 minutes remaining in the 10-hour endurance race. He then pitted for fresh rubber and let the No. 63 Risi Competizione Ferrari of James Calado, Giancarlo Fisichella and Toni Vilander by before giving chase and attempting to chase it down.

The Ford’s strategy wasn’t as strong as the Ferrari’s and Müller was unable to get within striking distance. He crossed the finish line in second place behind Fisichella , while the No. 3 Corvette C7.R of Tommy Milner, Oliver Gavin and Marcel Fassler rounded out the podium.

“I think we had a good shot to win it today, but it’s a tough one with all the yellows,” Müller said post-race. “You have to be at the right spot at the right time. Traffic was a big thing today, but you know what? That’s a brilliant second place here and I want to thank the whole team, every single person who works on this team, and everyone from Ford Performance, Multimatic and Roush Yates engines who are supporting us. I’m really proud to be part of this program.”