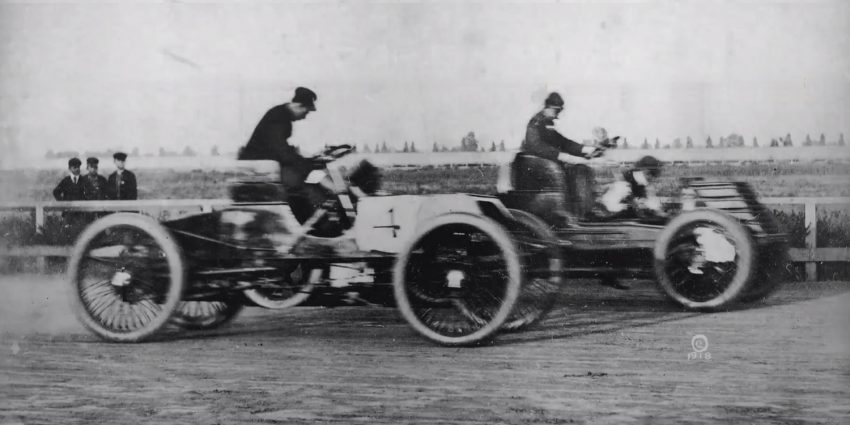 Yesterday, Ford Motor Company celebrated the 115-year anniversary of the one and only race win for an historically-significant car: Henry Ford’s “Sweepstakes.”

On-hand for the celebration was a replica of the 115-year-old car, which was completed a decade-and-a-half ago to commemorate the 100th anniversary of its history-altering race win. Like the original, it features a wooden frame and an 8.8-liter, two-cylinder engine, but offers no cockpit for the driver to occupy. The high-mounted seat and steering wheel are on the right-hand side of the car, as was customary for the time.

Some have called Ford’s 1901 win in the Sweepstakes “The Race that Changed Everything,” said Edsel Ford II, great-grandson to Henry Ford, at a special event at the Henry Ford Museum. “His very unlikely victory attracted the investors he needed to start the Ford Motor Company 18 months later.”

He then reportedly stepped aside to allow Roush Performance Engineer Glenn Miller to start the replica 115-year-old car, which spouted black smoke. While its pioneering technologies aren’t immediately obvious to most anyone alive today, Sweepstakes featured ceramic-covered spark coils – precursors to today’s ceramic-encased spark plugs – and vaporized fuel delivery not entirely dissimilar to fuel-injection systems. Advancements like these gave it an impressive 72-mph top speed in its day.

“There is no other company with our racing legacy,” said Ford Performance Director Dave Pericak. “Today we race for the same reasons that Mr. Ford did in 1901 – to prove our products on the track and then take that success and market it to consumers.”