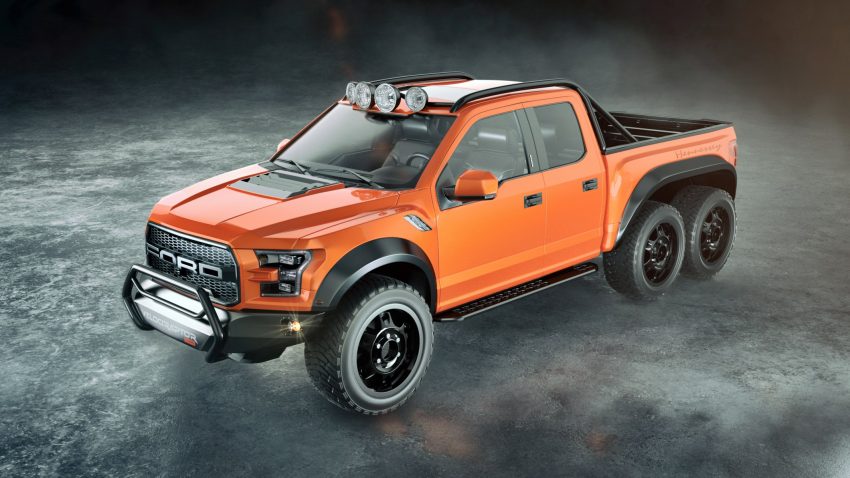 When it comes to traversing the toughest terrain, six wheels are better than four. The US Army recognized it when they commissioned the M39 series of 5-ton heavy-duty trucks. More than half a century later, over a hundred civilians discovered it for themselves when they purchased Mercedes’ G63 AMG 6×6.

Wearing a [*cough*] lofty $295,000 price tag, including the cost of the base Ford F-150 Raptor, Hennessey’s VelociRaptor 6×6 will feature an upgraded Fox suspension, 20-inch wheels with off-road tires, revised front and rear bumpers with a front-mounted push bar, a rollbar, LED off-road lamps, and of course, locking rear axles for traction in almost any circumstance.

An extra $22,500 will be needed to get Hennessey’s VelociRaptor 600 Twin Turbo upgrade tossed into the mix, which will boost output of the F-150 Raptor’s 3.5-liter EcoBoost V6 past 600 horsepower using upgraded turbos, an upgraded air-to-air intercooler and associated plumbing, and stainless steel exhaust components. Additional options will include things like upgraded Brembo brakes, special interior treatments, and – get this – “armoring systems.”

Yeah, your rich neighbor could soon pull up in a six-wheeled armored vehicle. Just how proud of your brand-new Audi do you think you’ll be then?

“Our VelociRaptor 6X6 is pure aggression on wheels – all six of them,” says Hennessey. “The new 2017 Raptor is going to be one of the best all-around trucks ever built. We are excited to help take it to the next level both in terms of performance and exclusivity.”