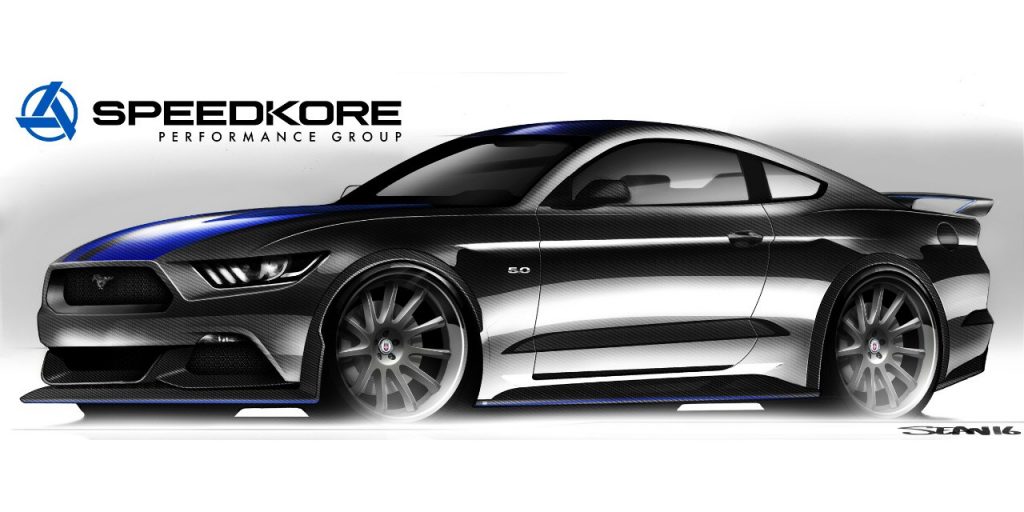 Next month is the annual Specialty Equipment Market Association (SEMA) Show in Las Vegas, and if last year’s show is any indication, Ford Motor Company will be well-represented by a broad range of different custom-built concept vehicles.

Let’s take a look at one of them: a supercar-ified 2017 Ford Mustang GT built by Wisconsin’s SpeedKore Performance Group.

SpeedKore’s new Mustang GT concept sets itself apart straight away thanks to an auto-claved carbon-fiber body kit, which reduces weight by some unspecified amount. That, in-conjunction with 825 horsepower from a Whipple-supercharged Coyote V8 and tuning by Jet Performance, practically assures jaw-dropping acceleration. Lest the concept get too easily overwhelmed, the suspension has been upgraded with an Eibach Pro-Street coilover kit and Eibach swaybars, while carbon ceramic brakes help haul it to a stop. As if that weren’t enough, SpeedKore’s 2017 Mustang GT is also rocking a set of staggered, 20-inch HRE Performance wheels: 10 inches wide in the front, and a massive 12 inches wide out back. They’re wrapped in Michelin Pilot Sport Cup 2 rubber. We have yet to see the interior of this top-shelf Mustang GT, but according Ford, it’s “race-inspired,” while serving up some class with leather seating from Katzkin and additional leather upholstery sourced from Gabe’s Custom Interiors.

The 2016 SEMA Show will be held from November 1st through the 4th at the Las Vegas Convention Center. Stay tuned for all the latest updates.