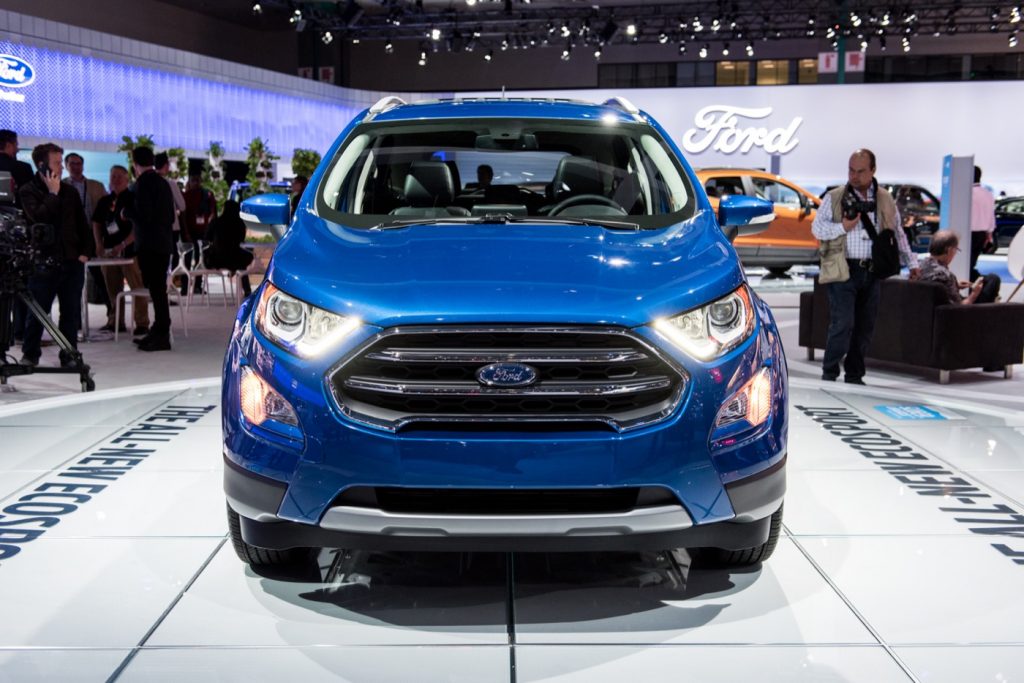 Ford is finally bringing its spritely EcoSport crossover SUV over to the US market, and without a moment to spare. The Crossover Craze is far from over as it stands, and the 2018 Ford EcoSport will stand to serve as the smallest offering in the SUV market that the brand will offer here in America. Without further interruption, here are our initial thoughts:

Late to the party, but better late than never. The market space that the EcoSport targets continues to grow, and an entry from Ford is bound to do well, not needing much effort to do so. The Indian-made Ford EcoSport should eventually duel with the Korean-made Chevrolet Trax for the top spot in the B-segment crossover market in the US.

To be blunt, I’m not much of a fan upon first impression. It’s no secret North American buyers have much higher standards when it comes to vehicles than where the Ford EcoSport originally hails from. The interior, while looking tidy, features a lot of very hard plastics. In comparison, at least the Chevrolet Trax plastics look slightly more upscale. And if it’s space you seek, the EcoSport also pales in comparison to the Trax, at least by first glance. Nevertheless, it should find plenty of love with consumers who are crossover crazy.

It’s a Ford Fiesta, but with a different wrapper. Did that description fail to elicit a passionate response? Yeah, same here. That said, the Ford EcoSport finally gives the Blue Oval a contender in the growing subcompact crossover space, and that’s important. Beyond that, it’s a cute-looking vehicle that promises to be quite efficient with its fuel, and SYNC 3 infotainment with available SYNC Connect, plus plenty of active driver assists, should lend it practicality and convenience beyond its price point. It’s perhaps a bit tough to be enthusiastic about such a mundane, mainstream product, but it’s equally hard to point to anything that Ford’s really done wrong with it. Maybe the tiny cargo area and hard interior plastics. Those aspects could certainly be improved.

I’m not so sure about this one. I like Ford’s redesigned dash and floating display, but the execution isn’t great. There’s hard plastic everywhere and the exterior styling already looks a bit dated. I also can’t help but think the way the hatch opens is entirely impractical. I am a fan of the Ford 1.0-liter EcoBoost engine, though, and the 2.0-liter should pair well with all-wheel drive.