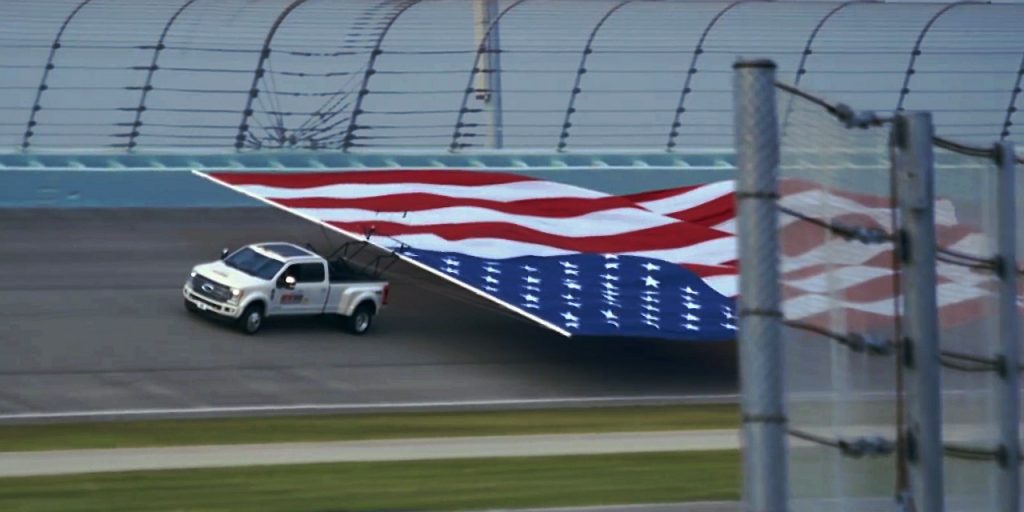 The all-new, 2017 Ford Super Duty just leapfrogged the Chevrolet Silverado HD for a place in the Guinness Book of World Records, surpassing a record for “World’s Largest Flag Pulled By A Moving Vehicle” set by Chevy earlier this year, according to GM Authority.

Just how big a flag are we talking about? The 2017 Ford Super Duty pulled an American flag that was approximately 92-feet on its longer side, and roughly 45-feet on the other, for a total square area of 4,123.5-square-feet. The Chevrolet Silverado 2500HD that claimed the record back in September pulled a flag that was about 80-by-40-feet – a total area of 3,203-square-feet. For each record attempt to count, each truck had to pull its flag a minimum of 100 meters without letting it touch the ground.

The 2017 Ford Super Duty achieved this new flag-pulling record at the Homestead Miami Speedway in Florida on November 19th, just ahead of the Ford EcoBoost 400 race for the NASCAR Sprint Cup. It was powered by Ford’s potent new 6.7-liter diesel V8, which is rated at 440 horsepower and 925 lb-ft of torque.

Ford Blue Advantage Expected To Pull In Significant Numbers In 2022