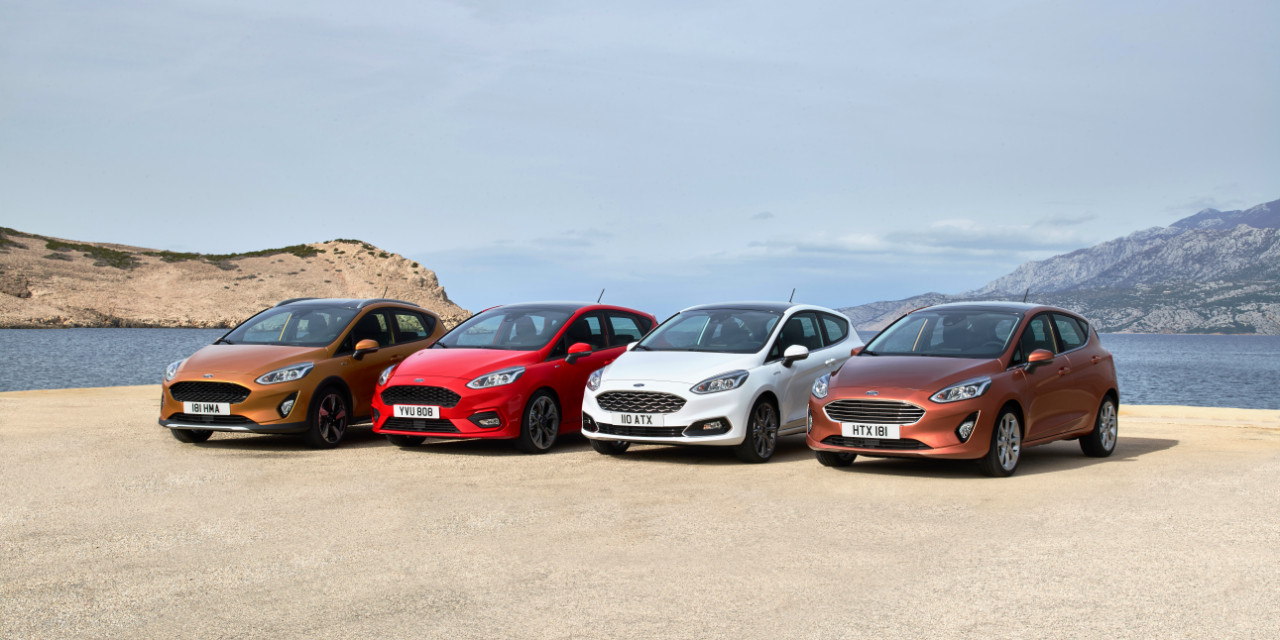 Today, at Ford’s manufacturing facility in Cologne, Germany, the automaker played host to some 2,500 employees, dealers, and members of the media as it pulled the wraps off of not one, but four new Ford Fiesta models slated to go on sale in the first half of 2017.

Those models are next-generation versions of the Ford Fiesta Titanium and Fiesta ST-Line, and new “Vignale” and “Active crossover” versions of the subcompact. The Vignale model in particular validates what’s been stated previously about the new Ford Fiesta moving upmarket to accommodate the less-expensive Ka+. It’s uncertain how many of these models, outside of the Titanium, will be sold in the United States, and for now, it’s equally unclear what powertrain options or base MSRP should be expected.

However, Ford has told us that improvements have been made to the three-cylinder, 1.0-liter EcoBoost engine available in both American and European versions of the Ford Fiesta. Namely, the engine will be the first volume-production three-cylinder in the world to offer cylinder-deactivation for improved fuel economy. It will be able to disengage (or re-engage) one cylinder in just 14 milliseconds – one-twentieth of the amount of time it takes the average human to blink – to enable efficient cruising without sacrificing much refinement.

We fully expect the tiny, 1.0-liter EcoBoost to play a bigger role in the North American version of the car this generation.

This revamped three-cylinder, and whatever other engines end up being offered, will reportedly pair with revised versions of the 5-speed manual and 6-speed PowerShift dual-clutch transmissions available now. Details, again, are forthcoming.

On the outside, the new Ford Fiesta looks entirely akin to the outgoing model, although we daresay it appears to have grown slightly larger. The vertically-stacked taillights of its predecessor are gone, replaced by horizontal assemblies, and the creases look as though they’ve been smoothed and softened some. The ST-Line model also gives us a sneak peek at what to expect from the forthcoming ST performance model – at least at the front. We require, like, 100% more rear spoiler.

Perhaps the most visible changes are inside the cabin, where Ford has completely reworked the rather alien-looking center stack (thank goodness). A new, floating 8-inch touchscreen will serve up Ford’s latest SYNC 3 infotainment system, and according to Auto Express, as many as 20 buttons have been deleted, with the remaining hard controls nicely reorganized. New, soft-touch materials replace the rather basic, rubberized surfaces previously found inside – at least on these four models – and a big, panoramic sunroof replaces the smaller, more conventional one on the outgoing car.

Finally, the new Fiesta will officially be the first Ford product to offer B&O PLAY audio.

We’ll have additional details in the future, so stay tuned for more great Ford Fiesta news in the coming weeks.