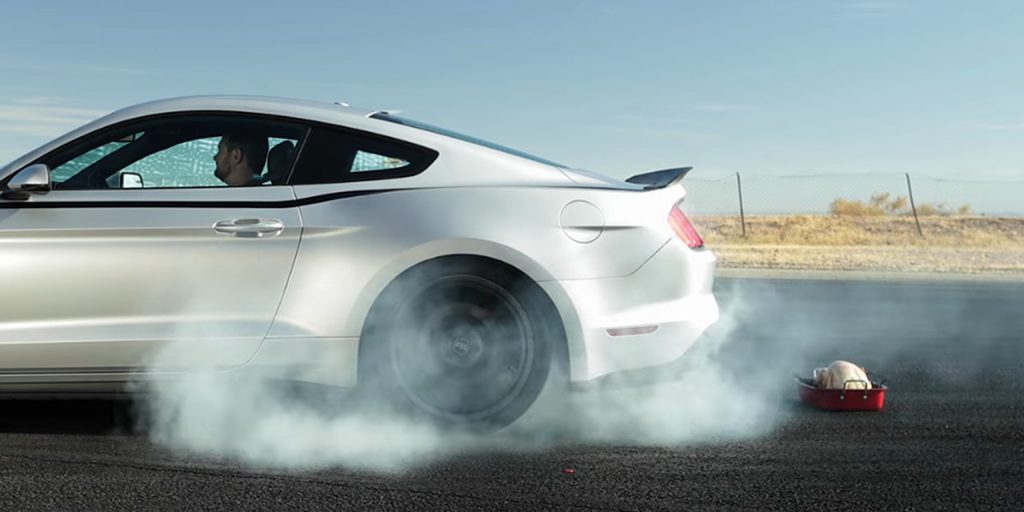 With Thanksgiving now upon us, pro drifter Vaughn Gittin Jr. is making sure that we all know the proper way to smoke a turkey – gearhead-style.

For this task, Gittin recommends placing the carefully-prepared bird right behind the rear wheels of a Ford Mustang RTR, engaging line lock – which applies the front brakes to keep the car stationary while power is sent to the rears, creating much tire smoke – and having at it.

(We probably don’t need to say this, but you should obviously not consume any food, turkey or no, that’s been prepared in such a manner.)

Vaughn Gittin Jr. is a top performer in the world of Formula Drift, currently being tied for the title of “winningest driver” in the history of the sport with a total of nine career victories. He finished the 2016 season in third place in the Pro driver category, placing after Chris Forsberg and Fredric Aasbo. His weapon of choice: an S550-based Ford Mustang RTR powered by a Ford Performance / Roush Yates 436 V8, producing somewhere around 900 horsepower and 750 lb-ft of torque.

We can’t wait to see how Vaughn Gittin Jr. does in the 2017 Formula Drift season. Until then, Happy Thanksgiving from Ford Authority!