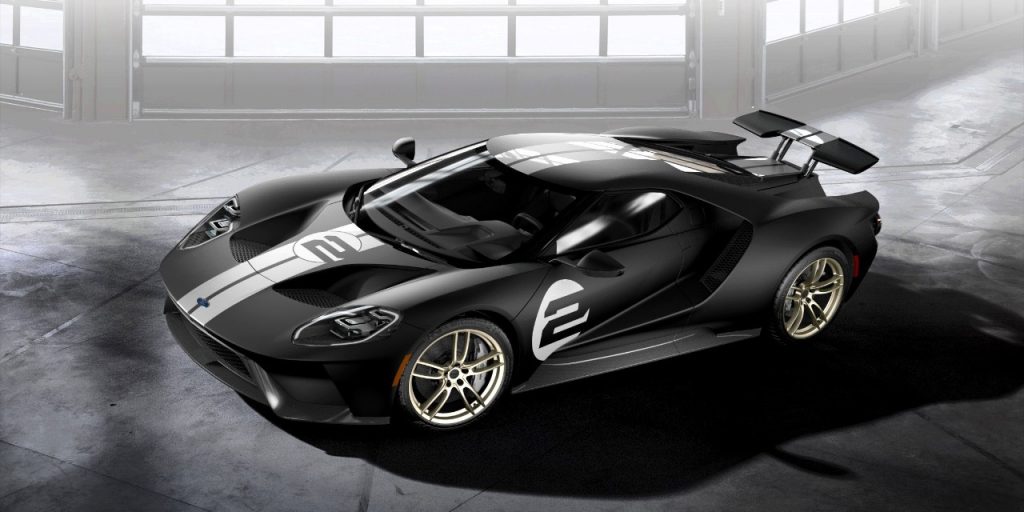 Like most modern Ford products, the all-new Ford GT supercar ships with a collection of different drive modes that can be called upon at the press of a button (or twist of a dial, in this case). Conspicuously absent from the list is a Tow mode (it has the F-150’s twin-turbo V6, so why shouldn’t it pull my boat?) but nevertheless, the five distinct modes that are offered are no less-specialized.

What follows is an explanation of each of the 2017 Ford GT’s five drive modes, informed by the reporting of Road & Track.

As the name implies, this is your “everyday” mode. The ride height sits at 120 mm, and damper stiffness is moderate, although hitting the “Comfort” button from this drive mode will soften the suspension up a bit. The Ford GT’s hydraulically-actuated rear wing stays down until a speed threshold of 90 mph is crossed; once erected, it retracts again when the speed drops below 81 mph.

You’ve invested a lot of coin into your shiny new Ford GT; why risk wrecking it in the rain? Wet mode is like Normal mode, except that the traction and stability control systems are perked up, ready to intervene should the vehicle’s sensors detect wheel spin and/or an excessive yaw rate. Throttle mapping is also made less aggressive, lest the driver accidentally break traction with their right foot.

Finally, we get to the fun stuff.

Road & Track reports that in Sport mode, the Ford GT maintains the same 120-mm ride height, but the dampers are firmed up a smidge to better control body motion. The traction and stability control systems ease up, allowing a bit more mirth before they intervene, and an anti-lag system comes on to help keep the turbos spooled by managing throttle opening and fueling. The rear wing now comes up at 71 mph, and lowers again after speed has dropped below 45 mph.

In Track mode, the Ford GT’s rear wing is raised full-time, and shutters at the front of the car close to divert air into a pair of high-pressure downforce channels. The wing also acts as an air brake in this driving mode, slanting forward whenever the driver hits the brake pedal to provide quicker deceleration.

Finally, call upon Vmax mode and the rear wing goes and stows itself, while the shutters in the nose open up again to reduce front-end downforce. The ride height remains low, and in all other ways, Vmax is essentially Track mode without the downforce.

Why? Because it’s this mode that enables the Ford GT’s top speed. Ford CTO Raj Nair still won’t say what that top speed is, according to Road & Track – only that it’s “above 200 mph.”

Even cooler is that the rear wing features a Gurney Flap, or “wickerbill,” that raises automatically along the back edge every time the wing is erected. This helps to bolster downforce without introducing much additional drag. The bottom face of the wing also changes shape as it’s deployed to create additional downward pressure.

For more on the all-new, 2017 Ford GT supercar, stay tuned to Ford Authority.