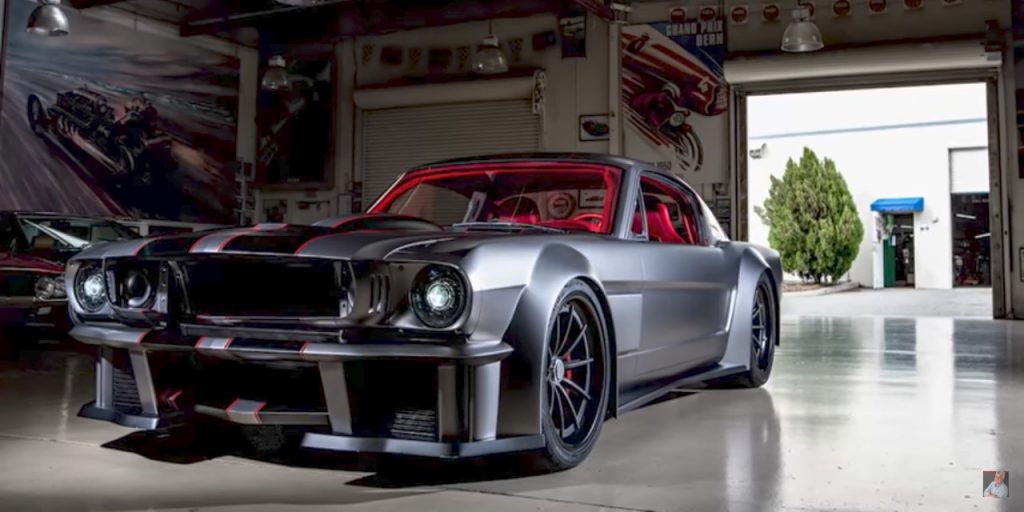 A previous version of this story mistakenly attributed this custom vehicle to Ringbrothers of Wisconsin. While that company did provide the car’s billet hood hinges, the build was conceived and executed by Timeless Kustoms. The article has been corrected to reflect that.

Timeless Kustoms’ wild, raucous 1965 Ford Mustang “Vicious” from the 2016 SEMA Show in Las Vegas just dropped by Jay Leno’s Garage recently, starring in a new episode of the aptly-named YouTube series in which we get to meet the car’s builder – Jason Pecikonis – and explore the car’s technical details in tremendous depth.

Vicious garnered copious attention at last year’s SEMA Show, astounding showgoers with its custom steel widebody and a reported 1,000-horsepower of thrust. That figure was achieved with a 5.1-liter “Aluminator” crate engine from Ford, MoTec engine management, 68-mm Twin Precision turbochargers, and a 2.3-liter TVS supercharger from Magnuson. At 3,450 pounds dry, this custom Mustang isn’t exactly a lightweight car, but neither is it a hog.

Vicious was built by Timeless Kustoms in California, over a 9-month period in which some 10,000 man hours were expended. It started life as a 1965 Ford Mustang coupe – not a fastback – with a six-cylinder engine. While it’s still quite recognizable as a Mustang, it’s truly astonishing how extensive its transformation has been.

Be sure to watch the latest episode of Jay Leno’s Garage above.