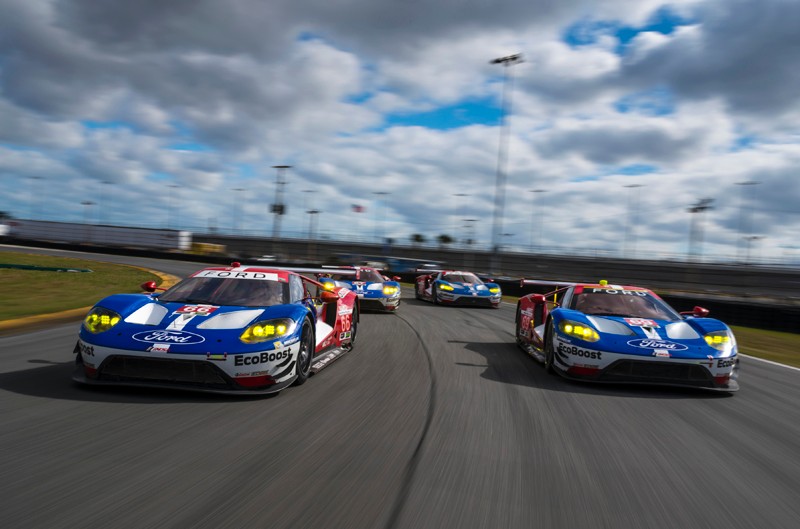 Ford Performance and Chip Ganassi Racing are making a bid for the IMSA WeatherTech Sportscar Championship GTLM championship in 2017 and are looking to kick things off with a win at this weekend’s 55th running of the Rolex 24 at Daytona.

Ford’s two IMSA Ford GTs crossed the finish line well behind many of their fellow GLTM competitors at Daytona last year, but with a full season of racing under the team’s belt and a six wins to the GT’s name, the Blue Oval squad should be a force to be reckoned with this year. Furthermore, Ford is shipping over its two GTs that race in the FIA WEC for Daytona, doubling its shot at winning the coveted endurance race.

“Like any new program, you’re going to have some growing pains as we did here in Daytona but we have worked through all of those and finished 2016 strong,” Ford Performance director Dave Pericak said. “This year is a totally different scenario. Not only do we have four cars instead of two, we also have a 24-hour win under our belts and a season’s worth of experiences with this car. I can’t wait to see what this year’s race brings.”

Bringing the FIA WEC cars to the U.S. for Daytona meant having the European driver roster participate in the race. The WEC driver lineup is plenty experienced, however it has one Daytona-rookie in GT driver and 24 Hours of Le Mans winner Harry Tincknell. The British driver participated in a pre-season test in the GT at Daytona, but this weekend will be his first time there for an sanctioned race.

“Testing (at Daytona) earlier this month with the Ford team went well,” Tincknell said. “We worked through our program while I got up to speed with the track. The Ford GTs were always at the sharp end of the timesheets so that bodes well for this weekend.”

“Another 24 hour race will help us develop the car for Le Mans and it gets the new guys in the team up to speed with pit stops before our main season starts,” he added.

Mercedes eSprinter Headed To U.S. To Compete With Ford E-Transit