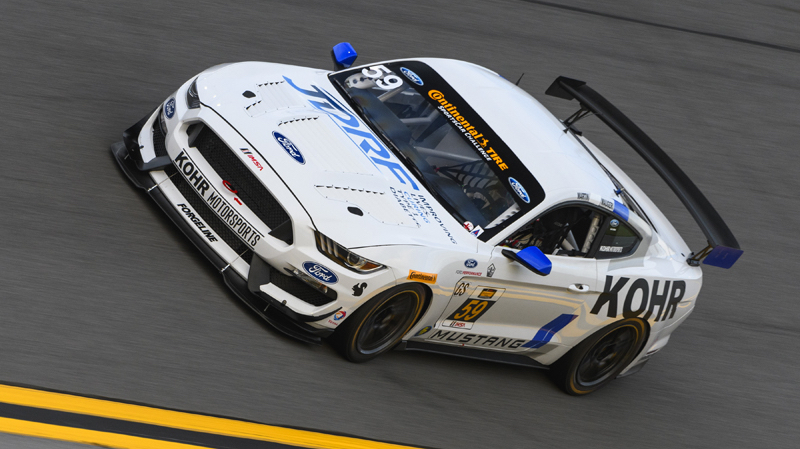 The new Mustang GT4 racecar, which debuted at the 2016 SEMA Show late last year, has qualified on pole for its first ever competition outing.

“I just found that sweet spot on the third or fourth lap,” Martin said post-session, slightly bewildered. “I had a good lap going and I just chucked it into the Bus Stop. I wasn’t sure I was going to come out the other side. I just carried a ton of speed, drafted up behind another car and got a really good pull from them and just popped out past and put down the time.”

“I had no idea what was going on until after I turned the laps and the guys told me ‘It’s you and then Maxwell, and he’s .02-seconds behind you,’ but I didn’t know which position I was in,” he added. “We had some new car teething issues for the afternoon, but it all came together in qualifying.”

Rounding out the top three in the Grand Sport class was C360 Motorsports’ Matt Plumb in the McLaren 570S GT4 with a lap of 1:56.360. The McLaren is another all-new addition to the GS class, which has experienced an influx of entries for after adopting global GT4 rules for the 2017 season.

The Mustang GT4 is built to the new GT4 standards and will race in the Pirelli World Challenge and European GT4 series in addition to the Continental Tire Series. The turn-key customer racecar is powered by a 5.2-liter V8 engine built by Ford Performance and Roush-Yates, which is connected to a six-speed sequential racing transmission. It also features aerodynamic parts engineered using techniques learned from the Ford GT GTLM racing program.