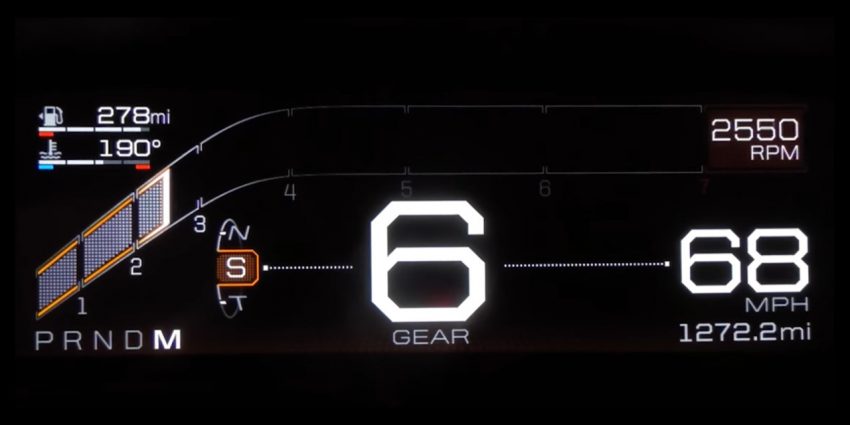 The 2017 Ford GT supercar features a brand-new, digital instrument display, as opposed to a cluster of conventional analog gauges, but don’t fret; this digital IP is uncommonly well-executed. There are no obnoxiously-busy design themes or cheesy graphics to be found here.

Measuring 10 inches across, the Ford GT’s digital instrument panel is always readable at-a-glance thanks to a simple, clean white-on-black scheme that never gets too cluttered to communicate efficiently. Subtle changes are affected in each of the GT’s five drive modes, depending on what information is most relevant to the driver in a given scenario; in Sport mode, the large, center number switches from vehicle speed to relaying which gear is selected, for example. Wet mode features a “wet floor” look at all times to remind the driver they’ve engaged a mode intended for slick conditions.

“Driver focus and attention are key with such high performance,” says Ford Performance Chief Engineer Jamal Hameedi. “We’ve designed the GT with a sleek digital instrument display that changes depending on driving mode in ways that are important and usable to the driver.”

According to Ford GT Engineering Supervisor Nick Terzes, the team “spent an enormous amount of time getting this just right. The result is simple, but achieving simple perfectly can be a challenge.” We couldn’t have said it better ourselves.

For now, this all-digital instrument panel is exclusive to the 2017 Ford GT supercar, but Ford says it has plans to install it into more vehicles in the future. You’ll hear no objection from us.