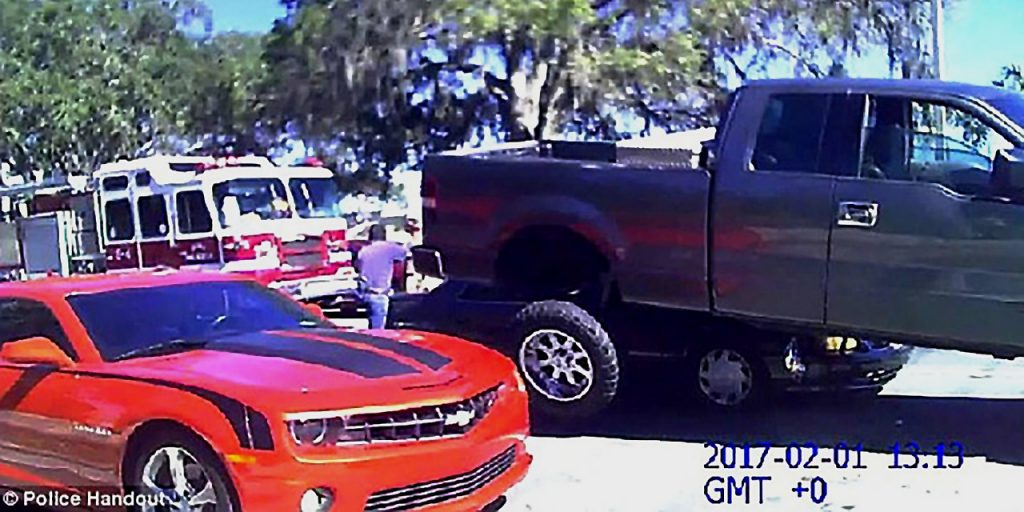 An 18-year-old man in a lifted Ford F-150 purposefully reversed his vehicle into – and on top of – a Toyota Camry in Ocala, Florida last week, after the Camry driver threatened the man, his girlfriend, and an 11-month-old child who were all riding together in the truck.

Local station News 13 reports that the Ford F-150 driver, one Zach Waring, was stopped at an intersection in front of a Toyota Camry that had been driving erratically, almost causing several crashes. The Camry’s driver, 53-year-old Adalberto Aponte, got out of his vehicle, approached Waring’s open window, and struck Waring multiple times in the face. In an attempt to get Mr. Aponte to back down, Mr. Waring’s girlfriend yelled from the passengers seat that the couple was carrying a gun, to which Aponte reportedly said, “I’ll show you a real gun.”

Unable to proceed through the busy intersection, fearing for his own life and the lives of his girlfriend and 11-month-old child, Mr. Waring “had no other option but to place his vehicle in reverse and hit Aponte’s vehicle in an attempt to prevent him from obtaining [his] firearm,” according to a police report. It worked, and Aponte was unable to escalate the altercation. When police arrived on the scene, they arrested Aponte, charging him with burglary, battery, criminal mischief, and driving with a suspended license.