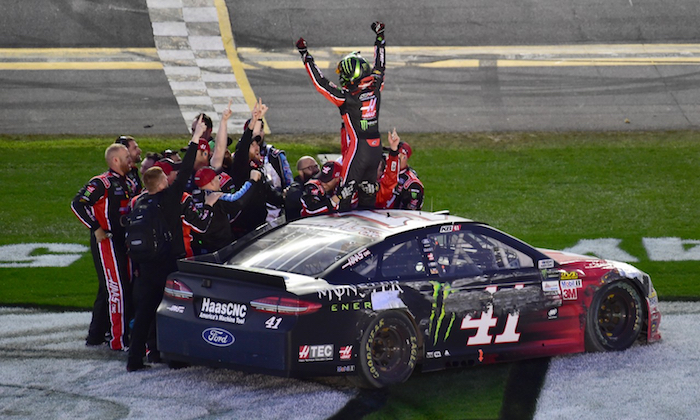 Kurt Busch drove to victory in the Daytona 500 Sunday after making a last lap surge to the front of the pack and beating Wood Brothers Racing’s Ryan Blaney to the finish line by just over 0.2 seconds.

Fellow Ford driver Blaney helped Busch to the win, pushing the No. 41 Stewart-Haas Fusion to allow him to surge past Kyle Larson and give Ford a 1-2 result. AJ Allmendinger, who was on a fuel saving run and pushed to the front of the pack as many others ran out of fuel on the final two laps, crossed the finish line third.

The race was filled with wrecks and saw many cars fail to make it to the finish line. On Lap 105, Joe Gibbs Racing’s Kyle Busch blew a right rear tire and hit the wall, collecting teammates Matt Kenseth and Erik Jones and also claiming Dale Earnhardt Jr. Pole sitter Chase Elliott also looked well poised to win after leading the race for a short period in its closing stages, but ran out of fuel on the white flag lap. Kurt Busch’s rear mirror also fell off in the last 30 laps, exacerbating the unpredictability of the race for him.

“There is nothing predictable about this race anymore, and the more years that have gone by that I didn’t win I kept trying to go back to patterns that I had seen in the past,” he said post-race. “My mirror fell off with 30 laps to go and I couldn’t even see out the back. It just got crazy and wild, and I am so proud of all the drivers at the end. We put on a show for a full fuel run, and nobody took each other out and it was one of the smartest chess games I have seen out there. All the hard work that Ford and SHR put into this — this Ford Fusion is in Daytona’s victory lane.”