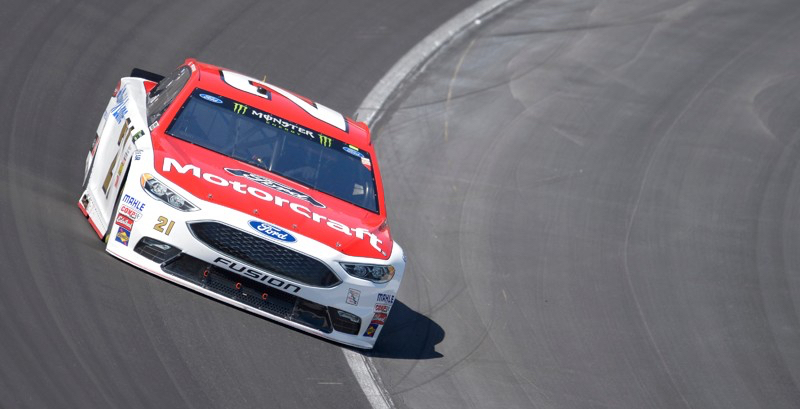 No. 2 Wood Brothers Motorcraft Ford Fusion driver Ryan Blaney dominated the opening stages of the O’Reilly Auto Parts 500 at Texas Motor Speedway, but a mistake on pit road ultimately demoted him to 12th. The race was won by Hendrick Motorsports driver Jimmie Johnson, who took his seventh win at the track and his first win of 2017.

Blaney won the first two stages of the race, leading 148 laps and collecting 20 championship points and 2 playoff points in the process. He then pitted from the lead under caution, which put him back to 20th to start Stage 3. He worked his way through the field and was running 5th when he pitted for the final time on Lap 300. That was when he slid through his pit box and his team’s airgun broke, exiting the pits in 12th.

“If you had asked me yesterday I wouldn’t have said we would win two stages and have one of the fastest cars,” Blaney said post-race. “They made really good changes this morning and that definitely says a lot. I am excited to get to Bristol in a couple weeks and see what we can do.”

Blaney’s undoing was good news for Johnson, who came alive in the later stage of the race and eventually took the win. Johnson had started near the back of the grid after flat spotting his tires during qualifying on Saturday, but worked his way through the field in a methodic manner to take the win and earn some valuable championship points.

NASCAR heads to Bristol Motor Speedway next for the Food City 500 on Sunday, April 23rd. Click here for full results from Texas and here for a full weekend schedule for Bristol.