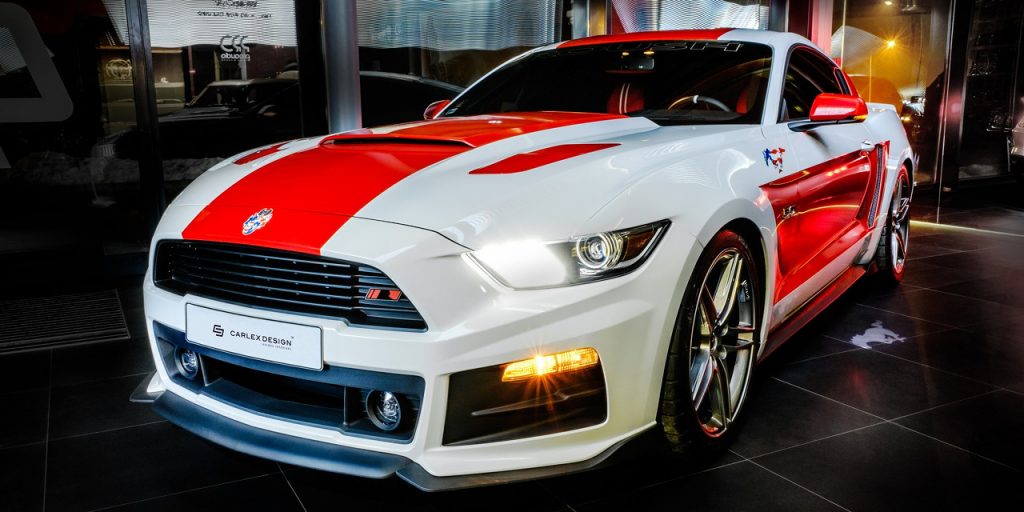 Polish custom-interior shop Carlex Design has finished what really constitutes a head-to-toe reimagining of the 2016 Ford Mustang GT for a customer, and it’s, uhm… “different.”

Inside and out, this customized Mustang GT has a bold, unapologetic red-and-white color scheme that’s nothing if not original. Carlex worked their magic on the interior, trimming the seats in plush red leather with white accents, and custom star-spangled Mustang graphics on the seat backs. The dash, too, is trimmed in red with contrasting white piping, and just about everywhere else you look is red, red, red.

This plays off the paint scheme of the exterior, which is predominantly white with broad red panels. In fact, it sort of recalls Canon Inc.’s classic racing livery, of which we quite approve.

To top it all off, this 2016 Ford Mustang GT has been fitted with a Roush Performance supercharger kit, resulting in peak output of 727 horsepower and 610 lb-ft of torque. If that, the hood snout and other Roush aero pieces, and the racing livery-esque paint job aren’t enough to communicate this car’s penchant for mischief, we don’t know what will.