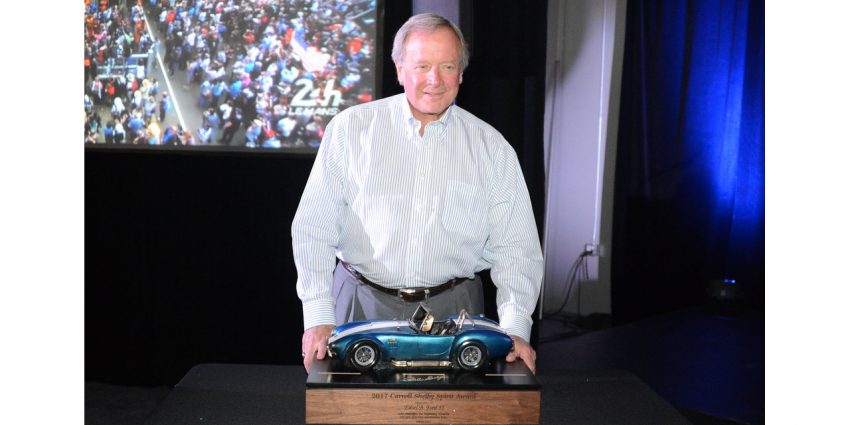 Members of the Ford and Shelby families joined together last month at the 10th anniversary Shelby Bash in Las Vegas, where they celebrated the legacy of the late Carroll Shelby, and his strong relationship with Ford, joined by a crowd of Team Shelby members.

Edsel Ford II, member of the Board of Directors at Ford Motor Company, was there, along with his son, Ford Performance Global Marketing Manager Henry Ford III. Edsel II took to the dais to recount his memories of flying to Le Mans at the age of 18 back in 1966 – the very year that Ford won the legendary 24-hour race, after Shelby had helped hone the GT40 for competition. He was “awestruck by all the people, all the cars, the noise,” and got to watch as the No. 2 GT40 of Bruce McLaren and Chris Amon crossed the finish line, winning the race for Ford.

He also recalled one summer when he was a teenager, which he spent working for Carroll Shelby at Shelby American. “I remember stopping off at Carroll’s house for some reason,” he said. “I don’t remember why that happened, but I knocked on the door and the most beautiful woman I had ever seen in my entire life answered, and I thought: ‘This is going to be a wonderful summer!'”

At the party, Carroll Shelby’s grandson Aaron Shelby, member of the Board of Directors at Shelby American, presented Edsel II the 2017 “Carroll Shelby Spirit” award. Edsel told the crowd of Team Shelby members the same words he’d spoken to Mr. Shelby himself years prior: “Carroll, the one thing I will do for you is I’ll do everything I can to make sure the name Shelby and Ford Motor Company stay together.”