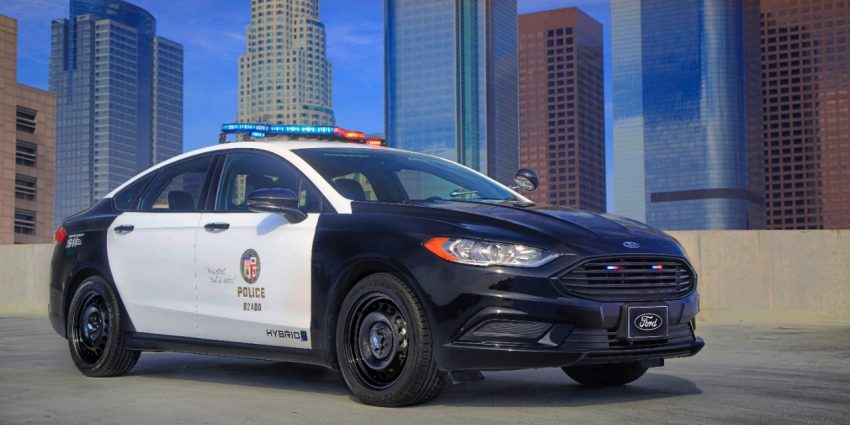 Gone are the days when police pursuit vehicles all but required big, hulking V8s to chase down the bad guys, and following in the wake of Ford’s current V6-powered Police Interceptor Sedan is this: the pursuit-rated Ford Fusion Hybrid police car, unveiled last Friday in New York and Los Angeles.

Dubbed the “Police Responder Hybrid Sedan,” this Fusion Hybrid-based law enforcement vehicle makes do with a 2.0L Atkinson-cycle four-cylinder and an electric motor fed by a 1.4-kW lithium-ion battery pack. It’ll run in electric-only mode up to 60 mph, although Ford says it can switch to peak-performance mode automatically when needed. Combined fuel economy is estimated at 38 miles per gallon, and at idle, Ford claims it will save an estimated 0.27 gallons of fuel every hour – no insignificant amount, when you consider how much time police vehicles might typically spend idling.

In fact, Ford estimates that the Police Responder Hybrid Sedan could save police forces up to $3,900 per vehicle annually in fueling costs, compared to its V6-powered Police Interceptor Sedan.

This Ford Fusion Hybrid police car is the first pursuit-rated hybrid ever made, tested and approved by both the Michigan State Police and the Los Angeles Sheriff’s Department. Versus the civilian Ford Fusion Hybrid, it has beefier brakes, an upgraded suspension, skid plate, tough steel wheels with different rubber, and an interior upfitted for the job, the LA Times reports. That outlet says the LAPD may be among the first agencies to have one, as they aim to purchase 300 hybrids by 2020.

Look for the Ford Police Responder Hybrid Sedan on the road in late-2018. Just don’t rubberneck. Cops hate that.