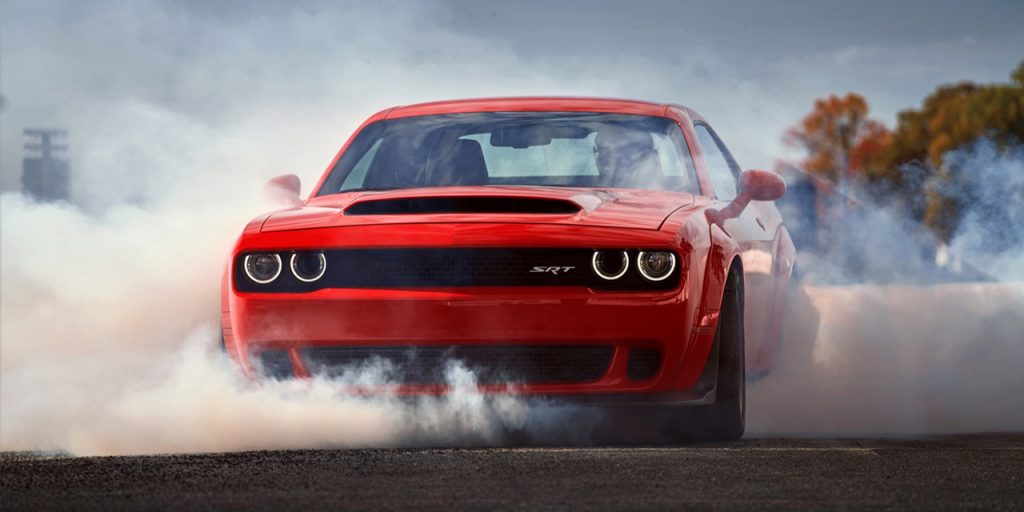 Mind you, that 840-horsepower rating is assuming there’s race fuel in the tank, and that the accessory Powertrain Control Module available with the car has been installed. On premium pump gas, the SRT Demon makes 808 horsepower.

But about that Powertrain Control Module: it’s included in an optional “Demon Crate” which, despite sounding like a satanic medieval relic uncovered in mainland Europe by a team of archaeologists, is actually a box full of tools and parts to aid owners as they ply the Demon on the drag strip. Beyond the race fuel-calibrated PCM, the crate contains a performance air filter, skinny front wheels, a floor jack, battery-powered impact wrench, and all sorts of other goodies helpful to the weekend warrior.

This, of course, brings us to an important question: is the new Dodge Challenger SRT Demon a threat to Ford’s Mustang Cobra Jet?

The Cobra Jet, remember, is the Blue Oval’s purpose-built drag racer, advertised with an eight-second quarter-mile thanks to its massive Whipple supercharger, factory Hoosier slicks, and other race-ready parts. That car, with an MSRP of $99,900, is just a sliver under $100k – and wouldn’t you know it, FCA North America Head of Passenger Car Brands Tim Kuniskis has said that the new Dodge Challenger SRT Demon will also start below $100k.

Granted, with an advertised quarter-mile time of around 9.6 seconds at best, the SRT Demon won’t be able to touch the Cobra Jet in the quarter-mile – at least, not right out of the box. But the Demon offers something the Cobra Jet can’t: the chance to drive it on the street. Ford’s quarter-mile monster is disqualified from driving on public roads on account of its factory roll cage, slicks, and lack of a VIN. And what’s more, SRT Demon buyers will always have the option of fitting slicks, installing a cage, and doing all else necessary to turn their Mopars into dedicated drag strip racers – for a price, of course.

All things considered, is the Ford Mustang Cobra Jet at risk of being outshined by Dodge’s latest high-horsepower muscle car? We look forward to hearing your opinions.

(Read up on the new Dodge Challenger SRT Demon at Fiat Chrysler Authority.)