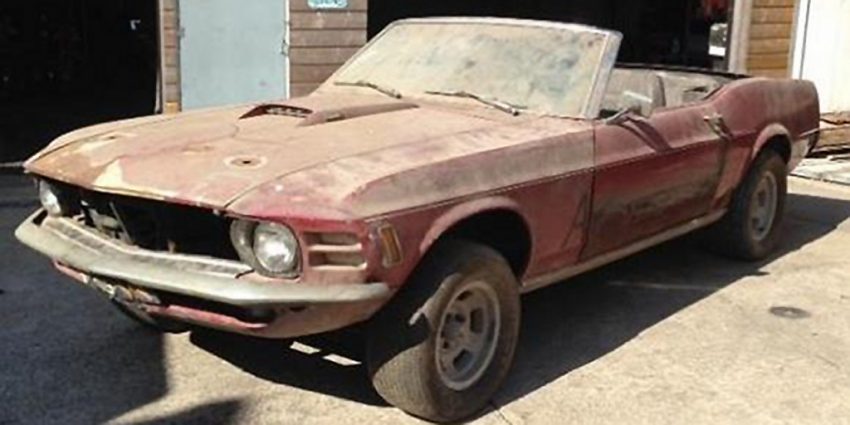 Would it surprise you to learn that Ford once looked into offering an all-wheel-drive Mustang shortly after the pony car’s April, 1964 introduction?

It’s true, according to The Drive; the automaker was reportedly looking for ways to keep its smash-hit sporty model fresh, and considered deploying an early street-compatible AWD system as a means to that end. So, a British company named “Ferguson Research” – after Harry Ferguson, part-owner of the Massey Ferguson tractor company – was sent a pair of Ford Mustang coupes in late-1964 to fit with its relatively-primitive all-wheel-drive system.

It’s unclear how Ferguson’s AWD system then found its way into any later-model Ford drop tops, but a 1970 Mustang FF (“Ferguson Formula”) 4×4 is currently listed for sale in the Netherlands. It’s looking a bit decrepit these days, caked with a thick layer of dust and missing both its motor and its front-drive unit; spending decades buried in a barn can often do that. Nonetheless, it’s an inexpressibly rare piece of Mustang history, and assuming that the missing pieces of the powertrain could be found or recreated, it would make one heck of a rolling conversation piece.

According to The Drive, the Ferguson Formula all-wheel-drive system utilizes a planetary center differential and a chain-driven front axle, with a 37-to-63-percent torque split front-to-rear. The example listed features an automatic transmission, and had a 351-cubic-inch V8 under the hood.

For more photos, check out the original listing on website Classics.nl.