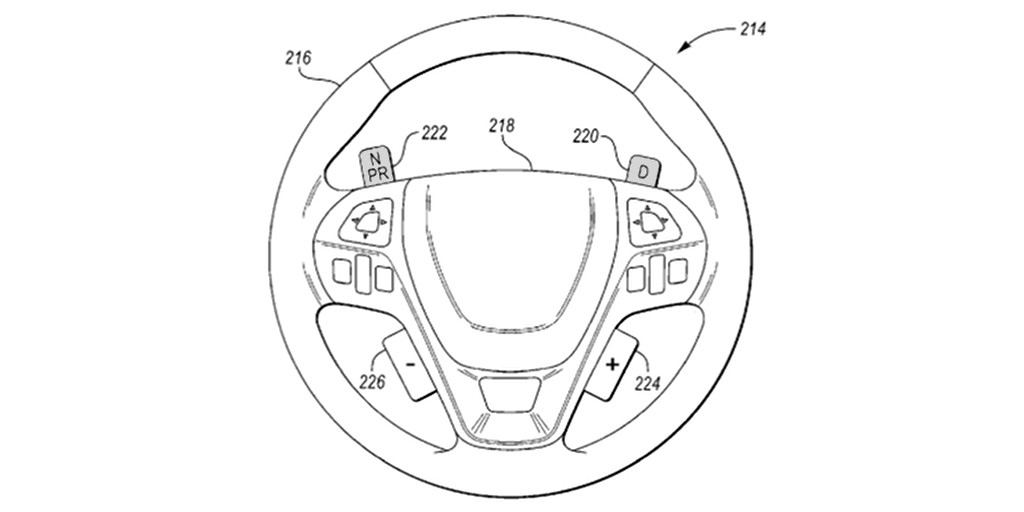 Ford has filed a patent application in the US for a new sort of gear-selection system that uses a pair of buttons mounted on the steering wheel to cycle through Drive, Neutral, Park, and Reverse.

Because as everyone knows, if it ain’t broke, best to just try and fix it anyway – where “it” is the traditional, tried-and-true methods of changing gears on an automatic transmission.

The folks at Motor1 uncovered the Ford patent application, filed late in 2015, and took note of the automaker’s justification for the patently bizarre invention: that “the location of user shift selection on a center console or instrument panel may detract from aesthetics and limit styling flexibility.”. One of the patent drawings depicts what such a steering wheel could look like, featuring two buttons mounted above the usual volume/cruise control/voice control wheel buttons – one marked “D” and one marked “NPR”.

Things get weirder, we’re afraid. Ford’s patent application details several different ways in which the logic governing those wheel-mounted buttons could control the behavior of the transmission, with possibilities including making the driver hold the “NPR” button in order to select Reverse; allowing the driver to simply tap the button to cycle through Neutral, Park, and Reverse endlessly; and forcing the driver to shift into Drive after using Reverse in order to unlock Neutral and Park again.

Try as automakers might to reinvent the gear selector switch, we here at Ford Authority will always prefer good, old-fashioned console-mounted levers and column-mounted stalks. What gets lost in the discussion as car companies start adopting diminutive electronic shifters to reclaim inches of space from traditional gear selectors is that automobiles are big, heavy, powerful instruments of death, making redundancy, clarity, and easy operability desirable attributes.

Ford has done one thing right, at least, in embracing these newfangled e-shifters; the rotary shift knob in the refreshed, 2017 Fusion physically clicks into a new position with each new gear selected, as opposed to some controls that spring back to the center position after the desired gear is selected. That communicativeness is nice. And as of late, Ford’s Lincoln luxury brand has taken to using buttons on the center stack, which may not be very satisfying to use, but at least it’s straightforward.

At the end of the day, the transparency of the controls that we drivers use to control our automobiles is critically important, and we can’t fathom drivers actually wanting confusing, wheel-mounted gear-selection buttons like those proposed in this patent application, even if it would save some valuable space in the cabin. So please, Ford; don’t do it.