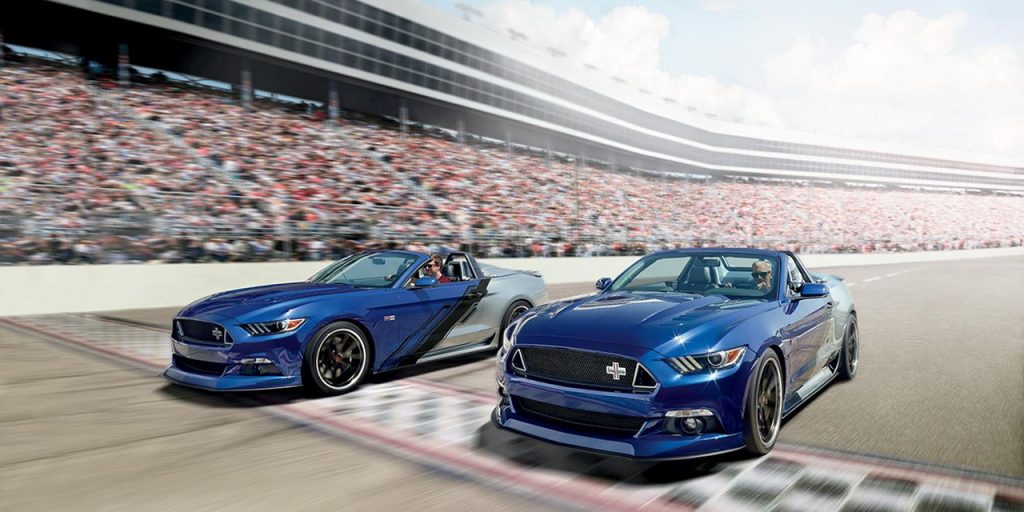 There’s some chance you’ll recall that late in 2015, department store company Neiman Marcus announced it would sell 100 examples of a special, limited-edition Ford Mustang convertible with 700+ horsepower and a whole suite of cosmetic and handling upgrades.

Nothing unusual there; Neiman Marcus releases a new exclusive, high-priced car every year as an “ultimate” fantasy gift in its annual Christmas catalog. What is unusual is what’s transpired in the time since that announcement.

It all started when our friends over at Autoblog stumbled across a Michigan dealer – Russ Milne Ford – in possession of 51 identical Ford Mustang GT Premium convertibles, all painted Deep Impact Blue. Needless to say, that’s pretty strange, not least of all because all were equipped with 6-speed manuals. The oddness of seeing so many identical, manual-equipped Mustang convertibles prompted some investigating, through which the outlet learned that all 51 cars had been earmarked for upgrading into limited-edition Neiman Marcus models, and yet somehow weren’t.

What exactly happened? We don’t know, but it’s probably a safe bet that the $95k price tag was deemed too steep for a mere Mustang, even by well-heeled consumers, resulting in far fewer sales than the involved parties had anticipated. We can’t be sure, however, as the company that appears to have been responsible for converting and selling the Neiman Marcus Mustang model – SMC Productions LLC – hasn’t been reachable. In fact, quick Google search suggests that the name has been taken over by a recording studio, although there’s a French film production company also operating under the moniker, whose works include Paris Jazz and The Girl With The Seamed Stockings.

We rather doubt that either of those SMCs was involved with the limited-edition Neiman Marcus Mustang.

Equally unknown is how many limited-edition Neiman Marcus Ford Mustangs were actually built and sold, or precisely how Russ Milne Ford in Macomb, Michigan is involved. Since last February, the dealer has whittled its fleet of manual 2015 Ford Mustang Premium convertibles in Deep Impact Blue down from 51 to just two. (They’re being offered at a heck of a good price, by the way: $34,995 with just 5 miles on the odometer.) But while Autoblog was told that the dealership was to be reimbursed by Ford for the cars, the automaker denies it.

Add to that the (supposed) pending litigation between Russ Milne Ford and the party responsible for marketing the cars, and you have, in essence, a quagmire, cloaked in mystery, encapsulated by an enigma. If that doesn’t instantly make the Neiman Marcus Mustang infinitely more desirable, we don’t know what will.