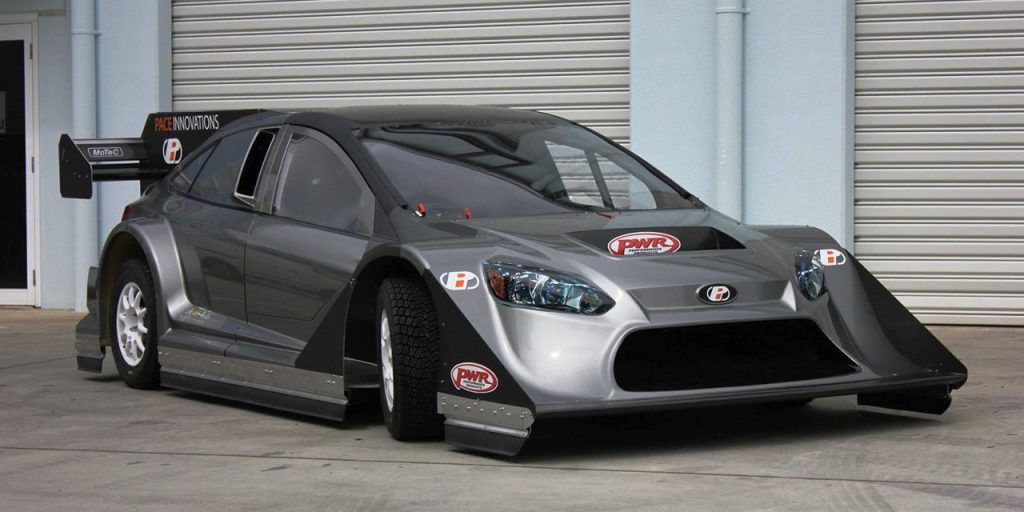 Petrolheads from around the world will descend upon Pikes Peak in Colorado next month, as one of the oldest motorsport events in the United States – the Pikes Peak International Hill Climb – takes place once again. For spectators, it’s a great chance to catch some high-adrenaline racing on an unforgiving 12-mile section of winding road, as well as witness some of the most outlandish purpose-built racing machines ever conceived.

The car was built by Australian race shop Pace Innovations, in collaboration with racing driver Tony Quinn, and despite its Ford Focus-esque appearance, it shares only its windshield and A-pillars with the production car.

Power comes courtesy of a twin-turbocharged, 3.8-liter V6 out of a Nissan GT-R, although unlike in that car, the motor sits behind the driver in this application. A massive front spoiler, absurd fender flares, a super-wide stance, and a rear wing that might be more at-home on a jumbo jet accentuate its aggressive appearance. The suspension, like everything else about the car, appears to be quite bespoke.

You can watch this zany Ford Focus hill climb car go about testing in the video above, courtesy of High Performance Academy. Be sure to check back after the 2017 Pikes Peak International Hill Climb to see how the car fares at the famous event.