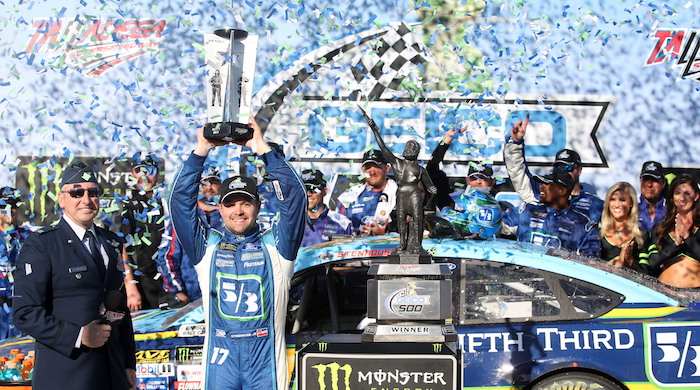 Ricky Stenhouse Jr. drove his No. 17 Roush Fenway Racing Ford to a win in Sunday’s Geico 500 from Talladega Superspeedway, earning his first win in 158 starts in the Monster Energy NASCAR Cup Series.

Stenhouse took the win following an overtime shootout with reigning series champ Kyle Busch and Jamie McMurray. He beat McMurray to the finish line by a scarce 0.95 seconds, who edged out Busch for second by a narrow 0.004 seconds. Aric Almirola and Kasey Kahne completed the top five.

“This is for all the guys at the shop — we’ve been terrible for a long time,” Stenhouse said post-race. “This year, every race, we’re just getting better and better. We knew Talladega was a good race track for us. It’s been a good one in the past.”

“This Fifth Third Ford was so fast today. Qualifying on the pole, got the win. Can’t say enough about the guys. It’s cool to get Jack Roush back in Victory Lane.

The race was stopped for 26 minutes after a major wreck on the backstretch on Lap 169. Nearly half the field was caught up in the carnage when the No. 47 Chevrolet of AJ Allmendinger got into the back of the No. 24 Chevy of Chase Elliott, launching the No. 24 into the air and turning Allmendinger’s car on its roof. Major names such as Kevin Harvick, Joey Logano, martin Truex Jr. and last year’s race winner Brad Keselowski were among those involved.

NASCAR heads to Kansas Speedway next for the Go Bowling 400 on Saturday, May 13th. Click here for full results from Talladega and here for a full weekend schedule for Kansas.