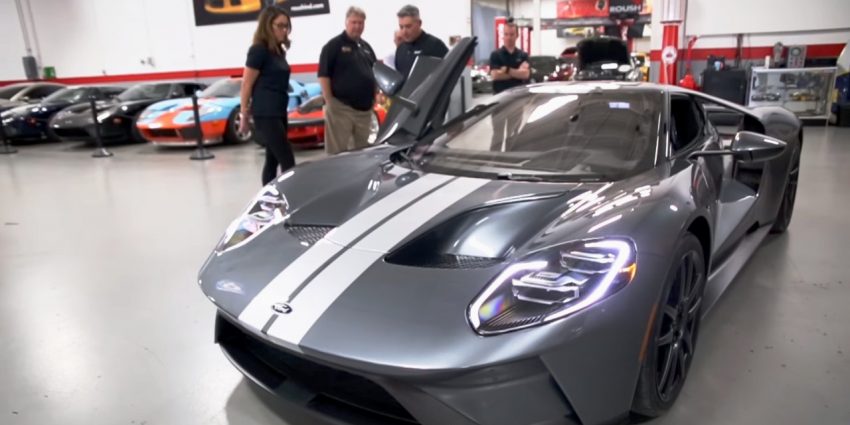 Jack Roush’s 2017 Ford GT looks to be a Liquid Grey example with Ingot Silver racing stripes, and matte-black carbon fiber wheels with black lug nuts. Somewhat surprisingly, it doesn’t appear to be one of the lightweight “Competition Series” models; those get exclusive red brake calipers, which are clearly absent here.

Competition Series model or no, all examples of the 2017 Ford GT ship with the same 647-horsepower, 3.5-liter EcoBoost V6 and 7-speed dual-clutch automatic transmission. All cars get the same hydraulically-actuated, height- and spring rate-adjustable suspension, as well, with power steering and active aerodynamics that run off the same fluid system. Just 500 Ford GT buyers have been selected by Ford to-date, covering the first two years of production; an additional 500 examples will be built through 2019.

Since Ford Executive Chairman Bill Ford and former CEO Mark Fields received the first two 2017 Ford GT examples earlier in the year, examples of the Multimatic-built supercar have gone out to several other high-profile recipients, including comedian Jay Leno and entrepreneur Andy Frisella. One of Jack Roush’s biggest rivals in the performance aftermarket, John Hennessey, published a video recently wherein he unboxes the Ford GT ordering kit with three of his sons.