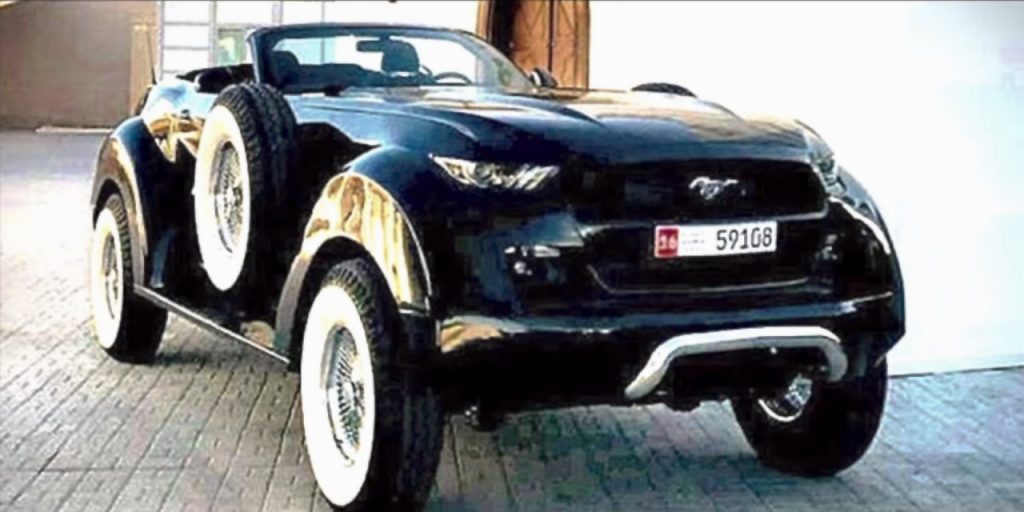 Well-known for his extensive car collection, “The Rainbow Sheikh” Hamad bin Hamdan al Nahyan of Abu Dhabi had something very particular in mind when he commissioned this custom Ram truck-based Ford Mustang 4×4. The vehicle was designed and built by Hussain Albagali, combining the body of an S550-generation Ford Mustang convertible with the ladder frame and powertrain of a 2015 Ram 4×4 with a 6.4-liter Hemi V8.

Love it or hate it, the end result is certainly unique, almost resembling a car of the 1930s with its heightened ride, whitewall tires and old-fashioned spoked wheels, side-mounted spares, exaggerated fenders, and integrated running boards. We can’t say that Ford likely had any idea anyone would use its sixth-generation Mustang to build such an idiosyncratic custom vehicle, but the build earns po06ints for originality.

Beside this Ram-based Ford Mustang 4×4, the Rainbow Sheikh’s collection includes or has included Mercedes-Benzes in every color of the visible spectrum, and an absolutely bonkers, gigantic replica of a 1950 Dodge Power Wagon that’s 64 times the size of the original, and weighs more than 50 tons. By comparison, his humble black Mustang convertible seems almost tame.